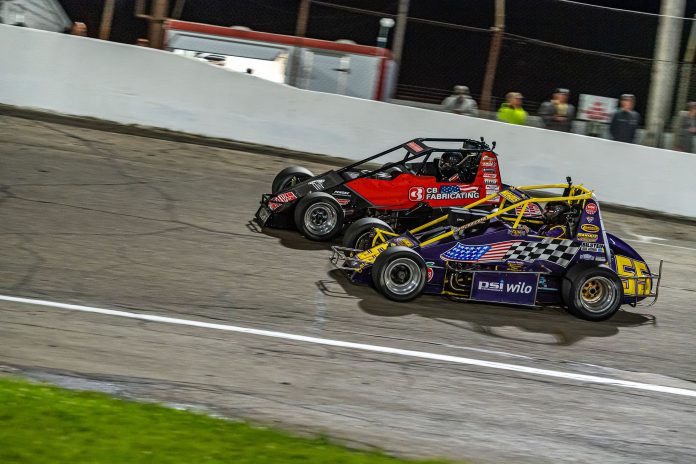 Anderson, IN – The 2021 season comes to a close on Saturday with the rescheduled Tony Elliott Classic on Paint the Night Pink for Breast Cancer Awareness. It will be the fourth non-wing sprint car race at Anderson Speedway this season (Little 500, Glen Niebel, Summer Sprint Showdown, Tony Elliott Classic).

The race bears the name of longtime sprint car competitor and supporter Tony Elliott. Elliott passed away unexpectedly in 2015 on a plane while traveling to a Notre Dame Football game. Elliott made 22 Little 500 starts. He finished in the top 5 on seven occasions with his best finish of second coming in 2008. The Warsaw, Indiana driver drove for two Little 500 Hall of Fame Car Owners in Gene Nolen and “Captain” Jack Nowling.

Reigning Tony Elliott Classic winner, Bobby Santos III (Franklin, MA) is entered to defend his crown. He won the last 125 lap in July. Santos has been extremely competitive in his DJ Racing machines, as he has won three of the last six races dating back to the 2020 Little 500. The other winner in 2021 season is the Little 500 winner, Tyler Roahrig. Roahrig returns to compete in his own CB Fabricating sponsored entry. The Plymouth, Indiana driver has finished 2nd in both the Glen Niebel Classic and Summer Sprint Showdown.

Cousins Dakoda and Caleb Armstrong will take a break from fall harvest to compete Saturday. Both drivers have been knocking on the door of a win. Caleb finished 3rd in the Glen Niebel Classic on July 10 and Dakoda finished 3rd in the Summer Sprint Showdown on July 31.

Emerson Axsom (Franklin, IN) will once again drive for Nolen Racing with his sights set on the 2022 Little 500. The young driver has been spectacular on the dirt and pavement in 2021. Axsom has competed in the other two 125 lap races this season with 4th and 6th place finishes.

Brian Gerster (Fishers, IN) makes a rare start outside of the Little 500 in the Davis-Gerster owned sprint car. Gerster finished sixth in the 2021 Little 500, completing 494 laps. The veteran driver was also inducted into the Little 500 Hall of Fame in May. Gerster has made two other Tony Elliott Classic start for Brad & Tara Armstrong in 2017 & 2018. He finished in the 9th and 7th positions.

New Castle, Indiana racer Kyle Robbins will make his first sprint car start at Anderson Speedway on Saturday. His last start at Anderson Speedway was in a Ford Focus Midget. He is an accomplished racer in many forms of racing and his resume includes winning the 2018 USAC Silver Crown rookie of the year. Robbins made his first pavement sprint car start at the Hoosier Classic at Lucas Oil Raceway earlier this year.

Also showing great pace in the two previous races has been Kyle O’Gara (Beech Grove, IN). O’Gara has had two top 5 finishes after a disappointing Little 500. O’Gara finished a 2nd at the Hoosier Classic at Lucas Oil Raceway.

Tom Paterson (Argos, Indiana) will be in competition this Saturday and claim the overall Auto Value Bumper to Bumper Championship Title.

Champion Midgets will also be in action. Kyle O’Gara won the first midget race of the year on July 10. The rejuvenation of pavement midgets is gaining momentum.