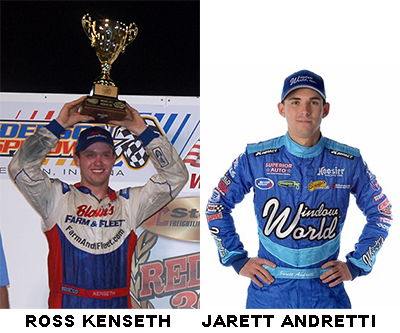 Names familiar to racing fans will be competing this weekend at Anderson Speedway in the ARCA/CRA Super Series and USSA Sprint Car Challenge.

Ross Kenseth, the son of NASCAR champion Matt Kenseth, will be coming to Anderson Speedway this Saturday for the opening point’s race for the CRA Super Series late models in the Anderson Properties 125 presented by Great Deals Savings Magazine starting at 7 p.m.

Kenseth is no stranger to Anderson Speedway having captured the Stoops Freightliner Redbud 300 in 2012.

The annual season opener for the Super Late Models at Anderson is considered a tune-up for the Redbud 300. Drivers entered for the race include T.J. Reaid, Brian Campbell the most recent winner at Toledo Speedway and defending CRA champion Travis Braden. Reaid is looking to make it three wins in a row.

Tyler Roahrig returns to the Late Model series and will also be racing in Sunday’s Glen Niebel Classic.

“I’m excited to be heading to Anderson,” Kenseth said. “It’s a track I really like racing on and I seem to run well there. So I’m looking forward to getting back on that track again.”

The Front Wheel Drive Oval Division and Thunder Roadsters will also be in action on Saturday.

On Sunday starting at 2 p.m. is the opening event of the season for the USSA Sprint Car Challenge with the “Glen Niebel Classic” for non-wing sprint cars in a 100-lap feature.

Expected to be competing is Jarett Andretti, a member of the famed Andretti racing family that includes: his father John; Great Uncle Mario; uncle Michael and cousin Marco. It will be the younger Andretti’s first appearance at Anderson Speedway in anticipation at a start in the Pay Less Little 500 on May 24.

Daleville’s Aaron Pierce will be looking for this third victory in the Glen Niebel Classic and fourth overall win. Pierce has won the race in 2003, 2012 and last year.

Niebel is a legendary car owner and mechanic in the Little 500 turning the wrenches for five victories. His cars put together four consecutive wins with Bob Frey at the wheel from 1987 through 1990 and again in 1995 with Bentley Warren at the controls.