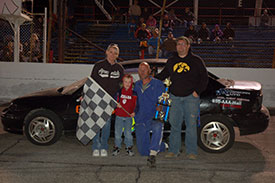 Jerry Dane trailed Jared Keller by almost a quarter of the race track with just one lap remaining when everything changed quickly in the Front Wheel Drive Oval Division feature.Keller started fourth on the grid but before the end of the first lap was on the point chased by Adam Lee, Dane and Kevin Henson.Keller steadily pulled away from the competition as Dane and Lee staged a spirited battle for second and Henson and Austin McKinney fought for fourth.Coming to the white flag off the fourth corner Keller encountered slower traffic. Unable to weave his way through the lapped cars, Keller made contact and rolled to a stop in the infield.At the same time Billy Hooten, in a borrowed car, lost a tire bringing out the caution with one lap remaining.Keller’s misfortune gave the lead to Dane with Lee, Henson and Austin McKinney left to battle for the win with one lap remaining.Dane got the jump on the restart to record his third consecutive win of the year with Lee coming home in second and a three-wide finish for third with Henson claiming the position over Austin McKinney and Ryan Claborn.Up until the incident with the lapped traffic, Keller could drive his car anywhere on the quarter-mile oval without losing any momentum.“I feel sorry for Jared (Keller),” Dane said in the Tim Thompson Nationwide Insurance Winner’s Circle. “He put a number on me tonight.”Dane and Brandon Lee Cook were unexpected winners in the two heat races when the winning car in both events failed to pass post-race technical inspection.In the first heat race Ron Phipps led the first four laps when the caution flag waved for a crash on the front straight.Dylan Hoppes running third at the time, spun on the front straight coming to a stop with the driver’s side door facing traffic. With the caution flag waving for some time, Hooten hit the side of Hoppes car. Both drivers were uninjured.On the restart Jeff Williams used the high side to pass teammate Phipps with Dane running fourth. Dane passed Henson on the front straight and on the seventh circuit got inside of Phipps entering turn three.A second caution flag waved on lap eight for debris. On the restart Williams was able to hold off Dane with Phipps, Henson and Lee rounding out the top five.When Williams and Phipps cars failed to pass tech inspection, Dane was awarded the win followed by Henson, Lee, Keller and Elliott McKinney.In the second heat race Austin McKinney led the entire distance with teammate Brian McKinney and Cook swapping the second spot. Tom Bullock and Jacob Brown rounded out the top five.When the two McKinney cars were disqualified it made a winner of Cook for the first time in his Anderson Speedway career with Bullock and Brown rounding out the top three.