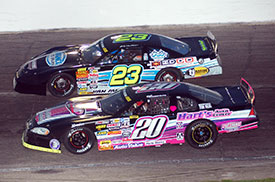 Two traveling series with the Champion Racing Association will be in action this Saturday at Anderson Speedway in tune-ups to two major races later in June.

The CRA Sportsman Late Models will be competing in a 75-lap feature with the McGunegill Engine Performance Late Models as the final tune-up for the PGG 100 on June 20.

Jack Dossey III has won three consecutive late model features including the first visit of the year by the CRA Sportsman Late Models. Scott Tomasik won the first MEP feature of the year.

The CRA Street Stocks will be making their second appearance of the year the with the final Triple Crown event scheduled at Anderson Speedway on June 27. That will be a 200-lap feature. Mason Keller won the 200-lap race at Kentucky Motor Speedway and Colby Lane scored the victory at Shady Bowl Speedway in Ohio.

So far this season there have been four different winners in Street Stock action including Robert Amos Jr.’s win in the first CRA visit of the year. Calvin Parham, Jimmy

Kirby and Josh Poore have all scored feature winner.

Entering the weekend Atkinson is also the point leader in the CRA Street Stock Division.

Joining the CRA card is the Mel Kenyon Midgets which featured Clayton Gaines winning the last feature race at Anderson Speedway be making the outside line work on the final lap to climb from third to celebrate in the AutoFarm McCrocklin Ford Winner’s Circle.

Kyle O’Gara was the first Mel Kenyon Midgets feature winner at the speedway.