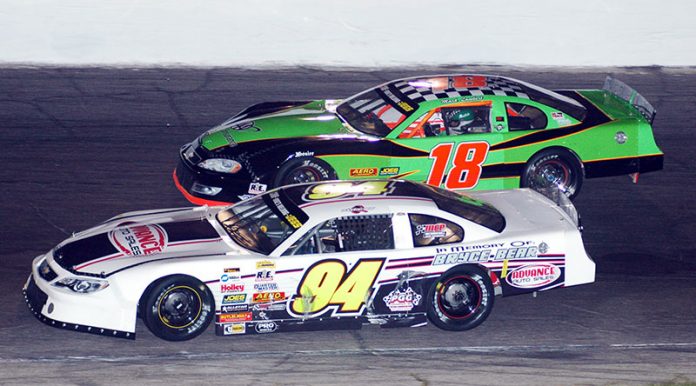 The third time proved to be the charm for Quinton Bear in McGunegill Engine Performance/CRA Late Model Sportsman competition.

Bear used contact with leader Jason Atkinson to take the lead on lap 89 to win the PGG 100 presented by Thompson Builders on Saturday at Anderson Speedway.

Bear  used the bumper on Atkinson, who led from the start, to grab the lead but everything changed on lap 96 when the caution flag waved for what was the final time.

Atkinson came to a stop during the caution, which moved Jeff Marcum and Ronnie Rose into the second and third spots. It was the second time in two weeks that Atkinson’s car slowed suddenly late in a race at Anderson Speedway.

Bear  was able to pull away from Marcum and Rose to record his first CRA win and first victory at Anderson Speedway. Greg VanAlst finished fourth followed by Kent Baledge.

Twice before this year Bear had victories at Angola and Winchester speedways stripped away when his car failed post-race inspection.

“The crew gave me a great car tonight,” Baer said in the Tim Thompson Nationwide Insurance Winner’s Circle. “We had to come from the back to the front; we had a hot rod.”

To record the win, Bear had to work his way to the front with aggressive driving after being relegated to the rear of the field for causing JP Crabtree to spin on lap nine.

Fourteen caution flags prevented the drivers to establish any type of rhythm, with the longest stretch of green flag action lasting 20 laps, just past the halfway point.

But during the brief green flag runs there was good racing action throughout the top ten drivers.

Helped by the invert of the eight fastest drivers, Atkinson jumped into the lead with an outside pass of pole sitter VanAlst.  Van Alst was passed by Thomas Hufferd on the 22 lap. A first year late model competitor Hufferd remained in the second spot until lap 72 when he was passed by Baer.

An impressive performance was turned in by Ohio driver Matthew Parsons, making his first start at Anderson, finishing seventh after starting 20 th in the 25-car field.

VanAlst extended his point lead in the CRA Vore’s Welding Late Model Sportsman over Jack Dossey III, who finished sixth after spinning with 12 laps remaining while battling for third.

During qualifications Billy VanMeter set a new track record with a lap of 12.858-seconds, which bested the mark he set on May 17 of 12.862-seconds.