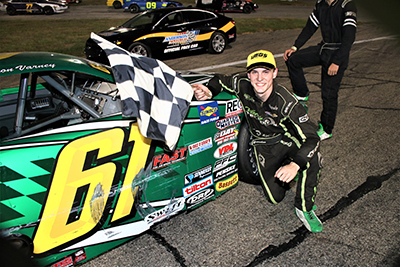 Varney took the lead on lap 40 after leader Hunter Jack sustained damage spinning to avoid an incident between Cassten Everidge and Ralph Harrod. Varney was able to open a comfortable lead over J.P. Crabtree and Jeff Marcum following a red flag on lap 50 because of fluids on the track. Following the restart Varney again pulled away from the field with Tanner Jack climbing from the fourth to second spot by lap 58. Billy Hutson moved into the third spot on lap 61 but neither driver appeared to be able to challenge for the lead. The fourth caution flag waved on lap 74 when Buddy Davis and Cory Adams tangled on the front straight, setting up a green-white-checker finish.Varney was able to maintain the lead on the final restart winning by .4-seconds over Jack and Hutson. Varney scored his first CRA win at Anderson Speedway on August 22. Jack said Varney got a good jump on the restart but ran out of laps to challenge for the win. With his fifth place finish Jeff Marcum won the McGunegill Engine Performance Late Model championship for the speedway.

In the season ending CRA Jr. Late Model race Jordan Riddick won for the second time at Anderson Speedway and Katelyn Hettinger was crowned the champion. Riddick scored the win on the final drive off the fourth corner when Zach Wilhelm and Kody King tangled on the front straight. Riddick powered past the two for the win with Wilhelm sliding across the finish line to claim second with Hettinger coming home in third. The race was slowed by six caution flags with the race halted on lap 14 for a four-car incident on the back straight that involved Wilhelm and Hettinger. Riddick had taken the lead from King on lap 15 but the two front runners were sent to the tail of the field after making contact on lap 21 on the back straight. Hettinger, 13, captured the championship in her second year of competition with the CRA Jr. Late Models.