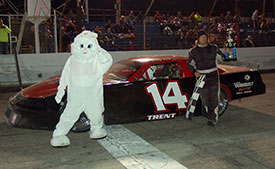 On a night when the attention was centered on three up and coming drivers, it was veteran Danny Trent making all the right moves to capture McGunegill Engine Performance Late Model feature at Anderson Speedway.During qualifications first Billy VanMeter and then Jack Dossey III shattered the track record set on opening night by Jason Atkinson.But when the night was over it was Trent making his first visit to the Tim Thompson Nationwide Insurance winner’s circle on Madison County Storm Water Partnership night at the races.Jared Thomas took the lead at the start chased by VanMeter, fast qualifier Dossey, Trent and Jon Heck.Six laps into the feature Trent used his years of experience to show the young guns how to move to the front at Anderson Speedway.He started by lightly tapping the rear end of first Dossey’s ride and then VanMeter’s coming off the corners to move up to the second spot. On lap nine Trent got Thomas loose coming off the fourth corner and completed the pass entering turn one.It was three classic examples of the traditional “bump and run” to gain the preferred racing line.VanMeter moved up to the second spot and stayed glued to Trent’s rear bumper until lap 29 when he brushed the back straight wall and a lap later was unable to turn entering turn four and made contact with the outside wall. VanMeter suffered a stuck throttle while racing down the back straight.Before racing action could resume, Jon Heck cracked an oil pan while he was running third.Dossey pressed Trent for the final five laps but was unable to get to the inside line coming off the corners. Kent Baledge came home in third followed by Thomas and Jon Watson.Trent was competing in a brand new race car and said the car was good all night.“I got shuffled back to fourth at the start,” Trent said after the win. “I just started working my way back to the front.“On the last restart I hit the oil dry and pushed up the track,” he said of forcing Dossey toward the wall. “I like coming here, I love this track.”Jared Thomas, 16, making his first visit to Anderson Speedway led the entire distance to win the PGG Enterprises fast heat. Dossey got inside of VanMeter entering the second corner on lap four and went on to finish second. VanMeter and Trent rounded out the top four.Jeff Marcum took advantage of the pole position to lead the entire way to score the victory in the second heat race. He was followed to the checkers by Rob Allman, Jon Watson, Baledge and Heck.