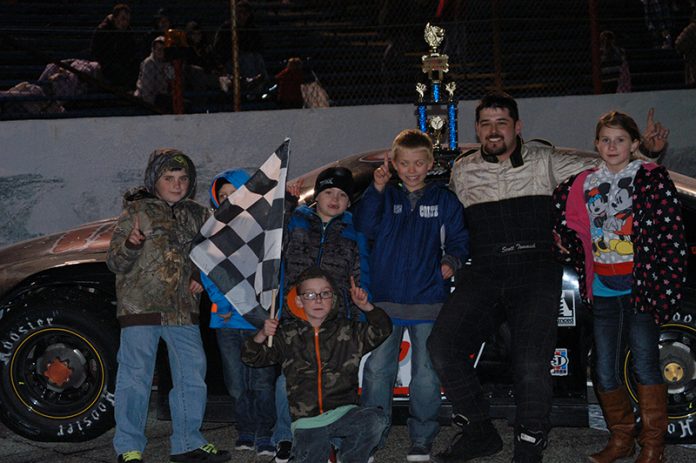 By Ken de la Bastide
Scott Tomasik used a bump and run move coming off the second corner with two laps remaining to win the season opening feature for the McGunegill Engine Performance Late Models on Saturday at Anderson Speedway.

Tomasik started seventh in the starting field and ran in the top five for the entire 35 laps, moving up to second on Lap 28 when Kent Baledge and Jared Thomas made contact in Turn 3 while battling for third.

Tomasik attempted to pass Rose on the outside with five laps remaining. On Lap 34, he tapped Rose entering Turn 2. Rose got loose and fell back to third as J.P. Crabtree also made the pass on the back straight.

It was Tomasik’s first career win at Anderson Speedway.

“I knew he (Rose) was driving hard,” Tomasik said in the winner’s circle. “He was overdriving and using a lot of the race track. I decided to hold my line.”

Running up front was not the place to be for at least two early leaders Jeff Marcum and Danny Trent, both of whom failed to go the distance.

Marcum, helped by the invert of eight for the feature race, led the first seven laps until Trent got inside entering Turn 1. The two traded paint with Trent taking the lead, and Marcum dropped back with a flat tire.

After 11 laps, fast-qualifier Jack Dossey III worked his way up to the fourth position when the first caution flag waved for a spin by Thomas on the back straight.

On the restart, Rose driving for new sponsor Interstate Auto Auction, used the outside groove to take the lead from Trent with Dossey getting around Tomasik on the front straight.

Trent’s run for the win ended on Lap 20 when his car appeared to experience an engine problem smoking entering the second corner. Dossey suffered a flat right front caused by a broken sway bar.

Thomas in the Car Brite sponsored car led the entire distance to win the fast qualifiers heat race with Dossey passing Crabtree on the eighth circuit and Rose on the last lap to come up a second short of the win.

Josh Cave driving for Greystone Concrete was chased for the most of the second heat race to record the win. Marcum passed Joe Woodring on the third lap with an inside pass entering turn one.

From that point Marcum set his sights on Cave but finished a half-second behind when the checkered flag waved.