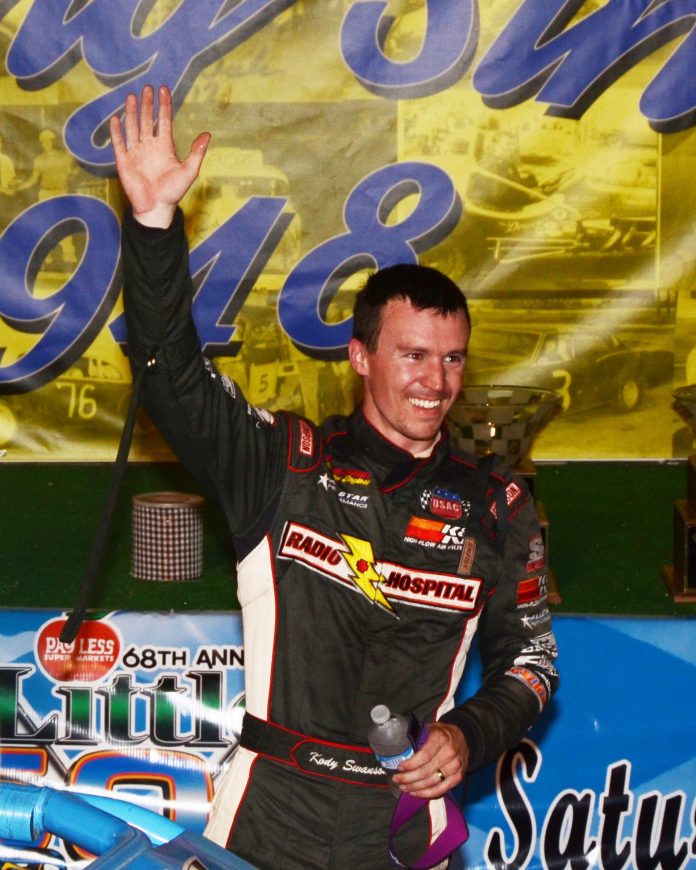 LEBANON, Ohio, Nov. 2 — Doran Racing is pleased to announce it has signed Kody Swanson, the winningest driver in USAC Silver Crown history, as its driver for the asphalt USAC Silver Crown races in 2021, as well as for selected asphalt sprint car events including the Pay Less Little 500 at Anderson (Ind.) Speedway.

Swanson, a native of Kingsburg, Calif. now living in Zionsville, Ind., is a five-time USAC Silver Crown champion and a three-time winner of the Little 500, the world’s richest asphalt sprint car race.

He has virtually rewritten the USAC Silver Crown history book, and has 30 victories in USAC’s premier division. He won the series’ driver championship in 2014, 2015, 2017, 2018 and 2019, and finished second this year in an abbreviated season due to the pandemic and rain.

The association is not new, as Swanson has run selected sprint car and sports car events for the Lebanon, Ohio-based Doran Racing team in the past. In fact, Swanson and Brad Jaeger will co-drive the Doran Racing 2008 Ford GT in the Historic Sportscar Racing (HSR) Classic Daytona presented by IMSA Nov. 4-8 at Daytona International Speedway in Daytona Beach, Fla. The pair won their class in the same car at that event last year, and finished third in GT.

“We may run the sprint car race at Showtime Speedway [Pinellas Park, Fla.] in February,” he added. Swanson drove a Doran Racing sprint car to victory in the Dave Steele World Non-Wing Sprint Car Championship 125 there this past February.

The team is sponsored in part by Glenn Farms of Woodland, Ga.

Doran Racing has prepared and fielded race cars in a wide variety of series for many years, from Indy cars to NASCAR trucks, and it is extremely well-known in sports car racing. Kevin Doran has won the Rolex 24 at Daytona as a crewmember, a chief mechanic, a crew chief, a team owner and even as a car manufacturer.

Under Kevin Doran’s direction the Doran Racing-prepared MOMO Ferrari was the first team in U.S. history to win the 24 Hours at Daytona, the 12 Hours of Sebring, and the Watkins Glen Six-Hour race in the same year. Doran-Lista Racing won the Rolex 24 in 2002, propelling its lead driver, Didier Theys, to the driver championship. And a Doran-designed and built Doran JE4 Daytona Prototype won the Rolex championship and took Forest Barber and Terry Borcheller to the 24 Hours of Daytona win in 2004.

“I’m very excited to join the Doran Racing team, and appreciate the opportunities we’ve had to race together already,” Swanson said. “They have had success in several racing series and bring a unique perspective to short-track racing.  They have a great team and a professional approach, and I believe they will help me continue to improve as a driver as we venture into additional types of racing.  I’m looking forward to racing together in the Silver Crown and sprint car divisions, continuing with their sports car program, and anything else that next year has in store for us.”