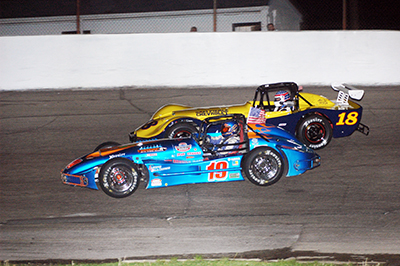 Champions will be crowned in the McGunegill Engine Performance Late Models and Thunder Roadsters at Anderson Speedway this Saturday during Ivy Tech Season Championships presented by Indy Fuel.
Dave Osborn holds a slim 77 point lead over John Robbins in the Thunder Roadsters Division entering Saturday night.
Robbins has won five feature races to Osborn’s two during the season, but Osborn has recorded four seconds and a third place showing during the year.
With double points awarded on championship night the title remains up for grabs between the two veteran drivers.
Jeff Marcum with four wins and seven fast times is on the brink of winning the late model championship with Brian Morrow a distance second in points.
The Street Stocks will be in action where John Poore has win twice with individual wins recorded by Andrew Cook, Mason Keller, Jimmy Kirby III and Jason Atkinson pulling into the
winner’s circle in 2016.
Ohio teenager Zack Miller will be seeking to keep his perfect record in Legends competition this year winning all four features, including the Grant Fritz/Greg Dietzen Memorial race.
Qualifying is set for 5:30 p.m. with racing action starting at 7 p.m.
Adult tickets are priced at $12 with $4 admission cost for children between the ages of 6 and 12.