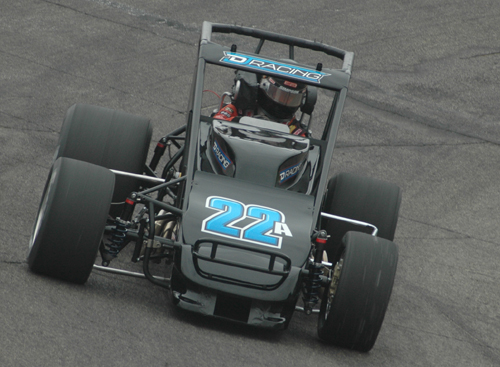 Quick to View Round 1 Qualifying Results

Three drivers, including a rookie, will make up the front row for the 67th running of the Pay Less Little 500 presented by UAW-GM at Anderson Speedway.

Bobby Santos III, an East Coast open wheel racing ace that also competes in the Midwest, earned his first pole position with a four-lap average speed of 80.8 miles per hour around the high banked quarter-mile track.

“We had a good car all day,” Santos said. “I was surprised we won the pole, but I’m pretty excited. Honestly I didn’t know if it would stand.

“My first lap was not too good, but the last three were consistent,” he said. “After where we qualified last year (22nd), I’m excited to be starting upfront.”

Santos said the Pay Less Little 500 presented by UAW-GM is a race that he enjoys running.

The fastest 15 drivers on Thursday are locked into the starting field with second round qualifying set for today from 1:30 to 3:30 p.m.

The 67th running of the Pay Less Little 500 Presented by UAW/GM is set to start at 8 p.m. Saturday with the 11 rows of 33 sprint cars taking the green flag.

There is a driver’s autograph session set for 6 p.m. with pre-race ceremonies starting at 7 p.m.

Reserve seat tickets for Saturday’s 67th Pay Less Little 500 presented by UAW-GM are priced at $30 and can be purchased at the Anderson Speedway ticket office daily and on race day.