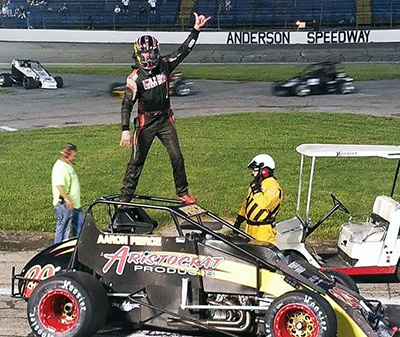 Muncie’s Aaron Pierce turned in a dominating performance to win the first edition of Thursday night sprint car racing at Anderson Speedway.
Pierce took advantage of the invert of the fastest six qualifiers and jumped into the lead at the start.
For the first 35 laps Pierce led a six car break away chased by Chris Neuenschwander, Bobby Santos III, Kody Swanson, Jerry Coons Jr. and Tyler Roahrig.
Neuenschwander attempted to get inside of Pierce several times as the leaders encountered slower traffic.
The first caution flag waved on lap 39 when Doug Fitzwater and Travis Welpott tangled in turn two, both drivers were able to continue.
Following the restart Pierce opened a comfortable lead while Neuenschwander and Swanson battled for the second spot.
Pierce finished 1.4-seconds ahead of Neuenschwander followed by Swanson with Santos coming home in fourth followed by Coons.
Jerry Coons Jr. set fast time during qualifications with a lap of 11.348-seconds besting Justin Grant by 0.19-seconds with Kody Swanson third quick. The top 16 qualifiers were within a second of the fast time.
The second sprint car race will take place on Aug. 2.
Dameron Taylor battled with early leader Trey Osborne for the first 23 laps of the K&M Tool & Die Kenyon Midget Series before pulling away to win the Parallax Power Supply 40.
Several times during the first 20 laps Taylor got inside of Osborne and the duo avoided spinning each other out coming off the fourth corner.
On lap 24 Taylor got inside of Osborne in turn three to take the lead and the victory. Logan Huggler came home in third.
Dave Osborn passed Chad Cory with nine laps remaining to capture the Thunder Roadster victory after the two drivers staged a spirited battle for the top spot.
Osborn was able to get around Cory following a restart with Rodney Oliver coming home third.