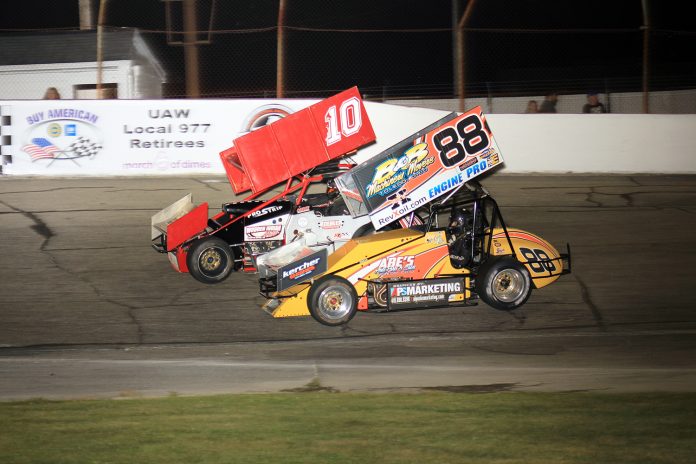 ANDERSON, IN – The fastest cars in short track racing the Must See Racing Series Winged Sprints will be invading Anderson Speedway this Saturday for Suzette’s Bail Bonds Night at the Races presented by AERCO Heating and Cooling.

The Must See Racing Winged Sprints will be making their only appearance of the season along with the Thunder Roadsters, Thunder Cars and Mini-Cups.

Two-time defending Must See champion Jimmy McCune will be seeking his third consecutive victory on the high banked quarter-mile oval.

Although McCune has not had Lady Luck smiling on him during the annual Pay Less Little 500 the Ohio driver is always a contender for the win when it comes to Winged Sprint action.

The Winged Sprint car drivers will be competing in a 50-lap feature.

So far this season McCune has scored four feature wins. Fisher’s driver Brian Gerster has two victories on the year and is always in contention at Anderson.

Bobby Santos III, Aaron Pierce and Bronzie Lawson have all scored victories with Must See Racing in 2018.

The Thunder Car Division returns to action with Ronnie Rose the most recent winner, but he has been challenged by Earl Adams Jr., Tyler DeHart and Jerry Swinford Jr. all year.

Dave Osborn will be looking for his third feature victory of the season in Thunder Roadster action where the racing has been thrilling with Chad Cory, Doug Dugger, Rodney Oliver and Jed Cotterman all having strong seasons.

Qualifying this Saturday is set for 6:30 p.m. with racing action at 8 p.m. Adults tickets are $15, $4 for children between 6 and 12 years of age and under six admitted for free.