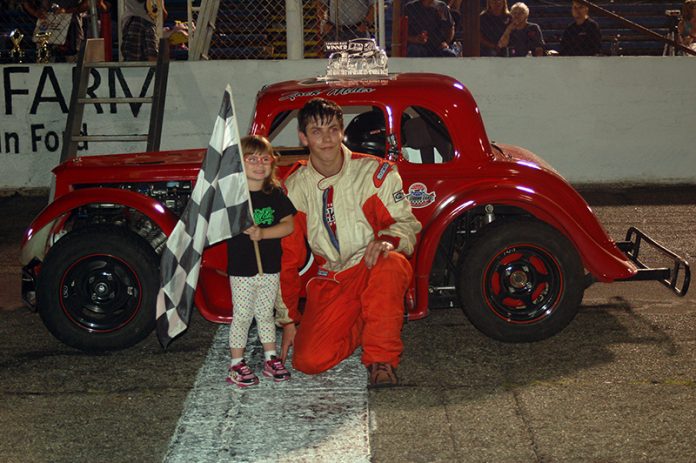 Zack Miller won the 19th running of the Grant Fritz/Greg Dietzen Memorial race at Anderson Speedway but it wasn’t without a variety of challenges.

For the first 30 circuits on Retro Weekend Miller kept the pressure on early race leader John Robbins, looking several times to make the pass on the inside. He finally grabbed the lead with an inside move coming off the fourth corner, but the lead was almost short lived.

Jacob Carroll spun in turn two on the 39th circuit and collected the cars of Miller and Robbins. Robbins night was over and Miller returned to the point chased by Adam Sturgill.

While in the lead on lap 47 Miller spun all by himself coming off the second corner and was relegated to the tail of the field.

With 17 laps remaining Miller passed Eric Black entering turn one and set his sights on race leader Griffin Brown. Two cautions bunched up the field and Miller made the deciding pass on Brown on lap 66 with an inside move coming off the second corner.

Following Miller and Brown to the checkers was Sturgill, Gerad Miller and Dave Osborn.

Josh Poore won his fourth consecutive Street Stock feature with a pass of Tyler Marsh on lap 25 after the two battled for the point for 21 circuits.

The early lead was taken by Andrew Cook but following a debris caution after three laps, Marsh was able to make an outside pass entering turn one.

Following a third caution flag in the first five laps, Poore was able to get inside of Cook entering turn one.

Marsh and Poore pulled away from the remainder of the field with the two many times battling side by side.

On the 25th circuit, Marsh appeared to slip in turn one which allowed Poore to complete the pass.

Starting from the front row Griffin, who has recorded three runner-up finishes in 2015, grabbed the top spot chased by Doug Dugger and Robbins as the three ran in a tight pack.

After 17 laps Robbins was able to get inside of Dugger entering turn three and immediately pulled up to challenge Griffin.

Griffin used slower traffic perfectly to his advantage to visit the AutoFarm McCrocklin Ford Winner’s Circle for the first time in two years.