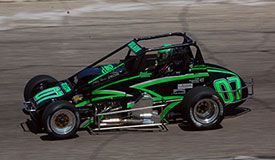 Jacob Wilson repeated as champion of the 66th running of the Pay Less Little 500 at Anderson Speedway on Saturday, May 24. Wilson ran in the top five for most of the race and took the lead for the first time on lap 328, he surrendered the lead to Shane Cottle when he made his second mandatory pit stop, but came out in second.When Cottle lost an engine on lap 386, Wilson returned to the point and led the final 114 laps for the victory. He becomes the first back-to-back winners since Eric Gordon accomplished the feat in 2004 and 2005.Wilson was followed to the checkers by Herald Bulletin rookie of the year Jerry Coons Jr. and Jo Jo Helberg, who started 20th in the 33-car field.For the second consecutive year saw a valiant effort for the win in the Contos Racing entry went up in smoke.A year ago Shane Cottle was threatening for the win putting pressure on eventual winner Jacob Wilson, when his engine expired with four laps remaining. This year the engine let go on lap 387 as Cottle was leading the race chased by Wilson.Cottle in the Contos Racing entry took over the lead on lap 209 following the first round of pit stops for the leaders chased by Helberg and defending champion Wilson.Being in the lead early in the race was not the place to be as first Aaron Pierce and then Bryan Clauson were involved with lapped cars knocking them from contention.Pole sitter Bryan Clauson led from lap 44 through lap 123 with Jerry Coons Jr. running on his tail pipe. On lap 124 Clauson tapped the back of the lapped car of Tom Paterson, causing Clauson to spin and Patterson climbing over the front of his sprint car.Clauson was able to continue but lost four laps as a result of the incident. He fought back to get a lap back when the leaders pitted and was threatening to get a second lap back near the 300 lap mark, when his tires went away.The back luck that has struck Daleville driver Aaron Pierce continued when he made contact with the rear tire of a slower car and hit the turn three retaining wall. Pierce had led the first 43 laps jumping to the point from the middle of the front row. 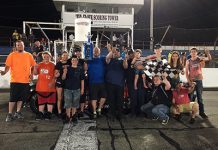