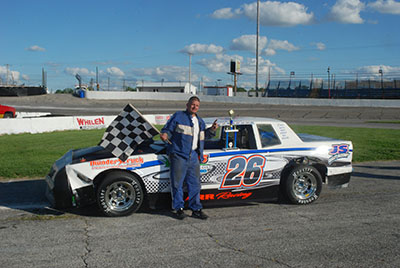 After a delay of two months because of the corona-virus pandemic racing resumed at Anderson Speedway. Because of Gov. Eric Holcomb’s executive order there were no fans admitted for Saturday’s racing. The racing was sponsored by Thousand Degree Pizza of Mt. Summit. Racing will resume next Saturday, again without fans who can watch the event on pay-per-view on Speed 51.

Josh Garr won a race of attrition in the Thunder Car feature followed by Nick Warner and Bill Overshiner. Before the race could start Warner and Ron Phipps brought out the caution flag at the start/finish line. On the restart Warner took the lead from Dylan Hoppes and Ronnie Rose. But Rose, who was victorious in the first of two heat races moved to the front of the pack on the third circuit. Rose continued out front until the 16th lap when Johnny Magee made the pass for the lead while Rose’s car lost power and was done for the day. A second caution flag waved on lap 19 when Dylan Hoppes and Aaron Jones made contact in the fourth corner and came to a stop against the outside retaining wall. Both cars were out of the race. Magee’s car lost an engine on lap 24 and the subsequent fluid on the racing surface eliminated two other competitors. Garr went on to record the victory followed by Warner and Bill Overshiner.

Next Saturday the Champion Racing Association’s Sportsman Late Models starts their 2020 campaign with a 75-lap feature. The Mel Kenyon Midgets will be in action for the second annual Dick Jordan Classic. Racing can be watched on Speed 51 starting at 4 p.m. You can purchase the pay-per-view here.