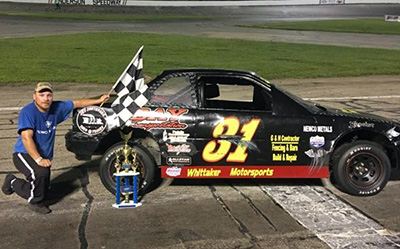 Ron Phipps continued his winning streak in Marcum Welding Front Wheel Drive competition but had to hold off a determined Nick Warner.

Phipps recorded his fifth win of the season on Saturday at Anderson Speedway as he continues to march toward the season championship that eluded him in 2016.

Phipps set fast time during qualifying for the Mid-Season championship race that awards double points chased by Ricky Tharp and Warner. A blanket could have covered the three front runners as Tharp and Warner waited to see if Phipps would make a mistake.

On lap 16 Tharp’s mount slowed and he was forced from the race leaving Warner to challenge for the victory.

For the next 14 laps Warner was glued to the rear bumper of Phipps car looking both high and low to make the pass.

During all the action Phipps maintained the preferred racing line and a last lap charge by Warner to the checkered flag coming off the fourth corner came up a car length short.

Anderson’s Ronnie Rose claimed his second feature victory in the past three races in the Thunder Car Division in a spirited battle with Earl Adams.

Fast qualifier Adams started on the pole position and was chased by Jeremy Threet, Rose and points leader Brad Cain.

Rose moved inside of Threet entering turn three on lap nine and for the next 15 circuits Adams ran a perfect line forcing Rose to attempt a pass in the high groove or wait for a mistake by the leader.

Rose caught a break on lap 24 when the caution flag waved for a spin by Tyler DeHart on the back straight. On the restart Rose took advantage of the high groove to take the lead but Adams stayed on his rear bumper to the finish.

“Earl (Adams) has a fast car,” Rose said in the winner’s circle. “I was trying to pass on the outside but couldn’t make the move stick. Running behind him was causing my car to overheat.

“The caution flag helped and Earl (Adams) races me clean,” he said.

Danny Trent set fast time during qualifying which put him on the pole positon with Marcum on the outside of the front row.

For the first ten laps the two front runners battled for the point with Marcum looking for a way to get inside of Trent coming off the second and fourth corners.

Marcum finally made the pass on lap 11 when he got inside of Trent and completed the pass on the front straight to go on to the victory. Trent finished second followed by Rich Segvich.

Anderson’s Josh Poore won the tune-up race before next week’s Norrick Petroleum 100 for the division after a good battle with Jason Thompson.

corner that allowed Poore to make the inside move entering turn one.

Poore went on to capture his third win of the season followed by Andrew Teepe and Jacob McElfresh.