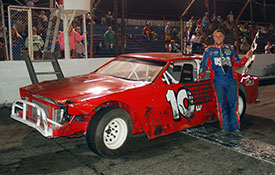 Robbie Wyman recovered from a crash while battling for the lead to score his fourth NASH-FM Thunder Car feature win of the season at Anderson Speedway on Saturday.With an inversion of the fastest eight cars, Curtis Chapman and Wyman the two fastest qualifiers, had to work their way to the front.The early lead was grabbed by Kyle Allmond with move Chapman and Wyman running inside the top five after five laps.With Randy Hoppes leading Chapman attempted to make an inside pass entering turn three, the two made contact with Hoppes spinning. That sent both drivers to the tail of the field.That gave the lead to Brian Lewis who was being threatened by Wyman. On the 10th circuit Wyman used an outside pass to get around Lewis for the lead. A lap leader while the two were still contesting the point, Lewis got loose and made contact with the outside retaining wall and Wyman spun.The caution flag waved on lap 17 when Chapman and Hoppes again got together in turn four. This time Hoppes was disqualified for rough driving and Chapman went to the back of the pack.Lonny Burton led the field back for the restart but Wyman was able to use the high groove entering turn three to claim the lead.Chapman, who made his way back to the front, finishing second followed by Burton, Allmond and Jimmy Hawkins.Wyman won the heat race for the fast qualifiers by passing Lewis at the halfway point with an inside move entering turn three. He was followed across the finish line by Chapman, Lewis and Burton.Hoppes scored his first heat win of the season when he slipped inside of Allmond exiting the second corner. Austin Russell came home in second followed by Hawkins, Allmond and Bruce McFall.