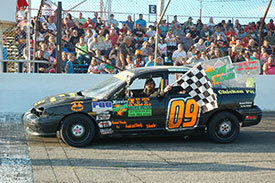 When it comes to the driver to beat this season in Front Wheel Drive action at the cross-over the name standing out is Nick Warner.Warner continued his dominance of the FWD Figure-8 season by winning the feature event for the fifth time in six races. But the fifth victory wasn’t a walk in the park as four drivers battled for the win through the first half of the race.Point leader Randy Owen took the lead on the opening lap from the second row with an excellent start when he was able to get inside of pole sitter Brian McKinney.Owen was chased by Kamden Creek, Kevin Henson, Warner and McKinney.Things got interesting on lap five with Henson, Warner and Creek all taking a shot at the leader. By that time Warner was running third and exchanging some paint with Creek.The caution flag waved on lap eight when the front runners all tangled in turn one and it appeared there was going to be a multiple car wreck, but it never happened.Warner got the jump on the restart that saw Owen tangle with Henson in turn three, losing a tire in the process.Following the restart Warner was able to drive away to his fifth feature win of the season followed by Henson, Creek, Brian McKinney and Josh Poore.Warner is not eligible for the championship.It started as a good night for Warner as he set fast time during qualifications and passed Owen with an outside move entering turn one to capture the first of the two heat races.Henson got around Owen on the sixth circuit to claim the second spot with Creek and Elliott McKinney rounding out the top five.Randy Hoppes survived a spin on the first lap and then led the entire distance to win the second heat race.Brian McKinney came home second followed by Poore, making his first FWD Figure-8 start, Trevon Henson and Jeff Williams.