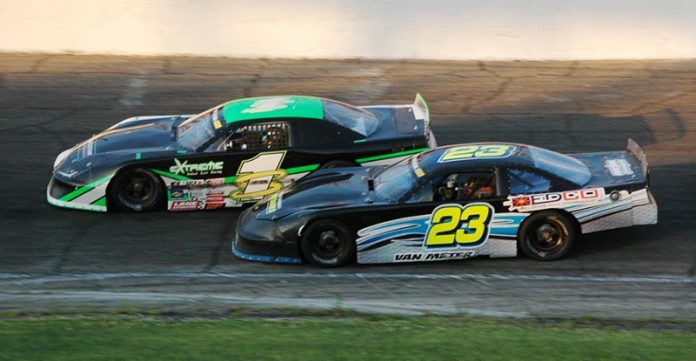 The right set-up coming off the corners at Anderson Speedway allowed Eddie VanMeter to score his third consecutive CRA Late Model win at the track.
The Indianapolis driver started on the outside of the front row on Saturday and quickly moved into the lead passing Greg VanAlst at the Ivy Tech green flag.
For the first 30 laps the top five ran nose to tail when the first caution flag waved when Tony Brutti and RJ Norton tangled in turn four.
The restart created a shake-up in the top five with fast qualifier Jeff Marcum moving inside of VanAlst to claim the second spot when the final caution flag waved on lap 54 when Billy VanMeter hit the turn four wall.
Marcum stayed glued to the rear bumper of VanMeter repeatedly closing the gap earning the corners but giving ground on the straightaways.
VanMeter won by six-tenths over Marcum followed by VanAlst, Wes Russell Jr. and Brutti.
Entering the night VanMeter had a 15-point lead over Terry Fisher Jr. for the Champion Racing Association’s Late Model title.
That margin widened when Fisher’s night ended on lap 33 when he made contact with a spinning Billy VanMeter. Fisher was credited with a tenth place finish.
CRA Street Stocks
Colby Lane recovered from a lap nine flat tire to be awarded the win when New Castle’s Ryan Amonett was disqualified in the Street Stock feature.
Amonett’s car was found to have an illegal rear end part during postrace technical inspection.
Jimmy Kirby III, looking to make it two wins in a row at Anderson Speedway, took the point at the start chased by Phil Jenkins and Andrew Teepe.
Anderson’s Josh Poore was the driver on the move early in the race moving into third after four laps and passing Jenkins on the back straight for second on lap 14.
For the next 12 laps Poore chased Kirby and when the leader went high in turn four it allowed Poore to take the lead followed by Amonett.
While leading on lap 30 it appeared a left front suspension broke on Poore’s car entering turn one and he made hard contact with the outside retaining.
From the point there was only one additional caution period over the final 45 laps allowing Amonett to extent the lead to the winning margin of 6.7-seconds over Colby Lane, Teepe, Kirby III and Jenkins.
Lane cracked the top five after 30 laps.
The Knightstown driver passed Kirby for third with an outside pass down the back straight and after a spirited battle with Teepe claimed the second spot on lap 45 with an inside pass on the front straight.
Hart’s Auto Figure 8
Curtis Chapman recorded his third feature win in the past five events for the Hart’s Auto Figure-8 Division leading the entire 30 laps.
For the first third of the race Chapman, Jeff Swinford and Shawn Cullen roared around the track in a tight formation.
The excitement was provided by fourth place running Nick Warner who lap after lap split the lead cars in the crossover.
Swinford, Cullen, Warner and Andy Sherley rounded out the top five behind Chapman.
Thunder Cars
Making his first start of the year in the Thunder Car division Swinford took the lead from Justin Sapp and pulled away to a comfortable win.
Once he got out front Swinford was not challenged for the point as the race was run caution free.
Swinford won by 2.8-seconds over Jerry Swinford Jr., Randy Hoppes, Sapp and Dylan Hoppes.