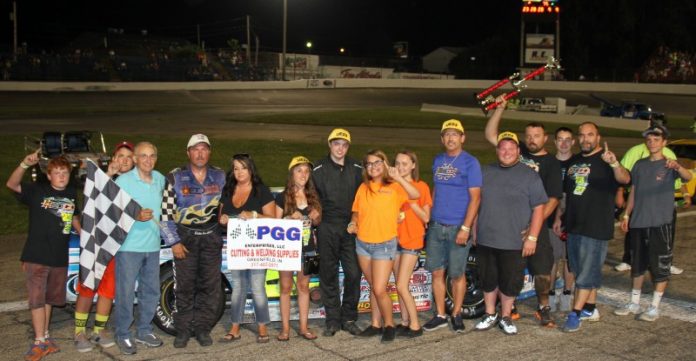 Indianapolis driver Eddie VanMeter had to recover from a late race incident to post the win in the Champion Racing Association Sportsman Late Model race at Anderson Speedway.

Maybe the presence of the full moon on Saturday during Military Appreciation Night presented by Double T Leather was the cause for only seven of the 16 starters still running at the end.

VanMeter took the lead from Shawn Amor on lap 32 with an outside pass going down the back straight and remained on the point until lap 61.

With Terry Fisher Jr. moving into the second spot following a restart on lap 33 with a nifty move around Amor and Jeff Marcum, Fisher quickly closed on VanMeter’s rear bumper.

Lap after lap Fisher was trying to find a way inside of VanMeter’s car with no luck. On lap 61 Fisher got into the back of VanMeter’s car entering turn three, the result was that both drivers spun and stacked up five other cars.
When the dust settled Amor was leading chased by VanMeter, Fisher, Tony Brutti and Wes Russell Jr.

A lap after the Ivy Tech restart, VanMeter passed Amor coming off the second corner and would go on to record the victory. Fisher passed Amor on lap 69 and again closed on VanMeter, but came up three-tenths of a second short.
Amor, Brutti and Russell rounded out the top five.

Amor led the first 31 laps but it was VanMeter on the move using the outside line to his advantage to move from the fourth starting spot to the second spot by lap 27.

For the first time in his brief career Plainfield’s Mason Keller won a feature event at Anderson Speedway in the Street Stock division.

Keller captured the victory which was a tune-up for next Saturday’s CRA 200-lap Street Stock feature.

The early lead was taken by Danny Adams who was chased by Andrew Cook, Jimmy Kirby III, Nathan Greene and Travis Burge.

Keller started eighth in the field after securing fast time during qualifications and by lap ten was running third with some strong inside passes.

Keller and Anderson’s Burge moved into the second and third positons on lap 16 when Cook in the Ricker’s supported car got trapped on the outside.

Keller and Burge moved into the top two positions on lap 17 when Adams went high in the corner and dropped back to fifth.

At the finish it was Keller, Burge, Andrew Teepe, Kirby III and Adams rounding out the top five.

Defending champion Jeff Swinford made it three consecutive feature wins recovering from a trip to the pits for an oil leak.

Swinford took the early lead and was pulling away from the field when the first caution flag waved on lap 17 when Ronnie Rose, running second at the time spun in turn two.

Following the Ivy Tech green flag Andy Shirley made hard contact with the turn three wall after contact with Rose. During the stoppage Swinford was sent to the pits to repair the leak.

That gave Shawn Cullen the lead chased by Ronnie Phipps and Camden Creek with Rose and Swinford starting outside the top five.

Cullen had opened a comfortable margin over Rose and Swinford when his car suddenly slowed with three laps remaining, ending his night.

Indianapolis driver Dave Osborn took advantage of a restart on lap 19 to pass leader Mark Dietzen to record his second feature win of the year in the Thunder Roadster division.

Dietzen took the lead on the second circuit from Brandon Whetzel and opened an sizeable lead when the caution waved when Darrell Brown made contact with the turn one wall while running fifth.

Osborn was followed to the checkered flag by Dietzen, Doug Dugger, Rodney Oliver and Whetzel.