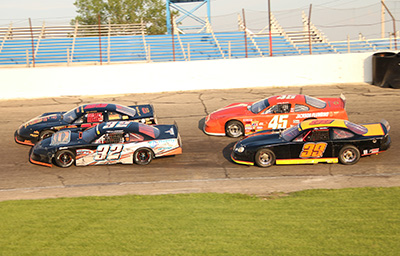 Indianapolis driver Billy VanMeter took what he learned in a practice session and parlayed it into a feature late model win at Anderson Speedway. VanMeter scored his first career McGunegill Engine Performance feature victory on Saturday taking advantage of a restart.

Defending series champion Jeff Marcum, helped by the inversion of the fastest six cars following qualifying, started on the front row and took the lead immediately. VanMeter started third and was running second after one lap with Nathan Greene, J.P. Crabtree and Zach Tinkle batting for the third spot. Ronnie Rose climbed into the top five by the seventh circuit when Greene retired with smoke pouring from his race car on lap 10 and the caution flag waving on lap 13. On the restart VanMeter powered around Marcum entering turn one to take the lead and steadily extended the advantage. Behind the two front runners there was an intense battle between Rose and Tinkle for the third spot. Several times Tinkle gave Rose a bump in the corners but was unable to get to the low line. With one lap remaining Tinkle got inside of Rose coming off the fourth corner and the two made contact coming to a rest on the front straight. That altercation allowed Crabtree to finish third followed by Rose and Tinkle.

In only his second visit to Anderson Speedway Indianapolis competitor Michael McKinnon dominated Marcum Welding Front Wheel Drive action. McKinnon set fast time during qualifying, won his heat race and then scored the feature victory. Nick Warner grabbed the early lead but was passed on the second circuit by Shane Reed. Meanwhile McKinnon was working his way up from the eighth starting position. McKinnon was running second by the sixth lap when he passed both Warner and Ricky Craig on the back straight. He was able to get inside of Reed coming off the fourth corner on the tenth lap and pulled away from the field. Berry Turner passed Reed on lap 14 but was not able to challenge McKinnon for the victory.Reed, Warner and Craig rounded out the top three.

Cole Rhoten drafted behind Randy Nesbitt for 18 of the 20 laps in the Midwest Asphalt Champ Karts feature and then drove underneath coming off the fourth corner on the penultimate lap to record the victory. Nesbitt finished .175-seconds back with Scott Carson grabbing the third spot.