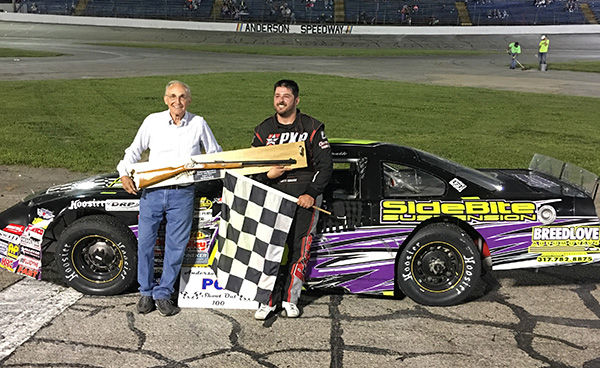 What a difference a week made for Avon driver Scottie Tomasik who powered his way to the PGG Late Model Shootout at Anderson Speedway.
A week ago Tomasik was the fast qualifier for the Top Speed Modified series event at Anderson Speedway but failed to complete a circuit in the 60-lap feature.
On Murat Shrine Night Tomasik set fast time during qualifying and would start fourth in the field following the inversion.
Alexandria’s Kent Baledge took the lead at the start chased by New Castle driver Jason Neal, Tomasik and Jeff Marcum. Tomasik and Marcum raced side by side at the start before Tomasik took the third position on lap 11.
Neal got inside of Baledge entering turn three on the 14th circuit with the end result both drivers spinning and rejoining the field at the back of the pack.
That put Tomasik on the point followed by Marcum, RJ Norton Jr., Tyler Marsh and Dustin Burge. For the next 87 laps Marcum would drive in Tomasik’s tire tracks looking for a chance to take the lead.
During five following restarts Tomasik was able to maintain the lead over Marcum who could never seem to close to within more than car length from the leader.
The red flag brought a halt to the action on lap 37 when Robert Noel lost the brakes on his car and made heavy contact with the turn four wall. The impact caused heavy damage to the right front of the car but Noel emerged unhurt.
Neal recovered from his early spin to battle with Baledge for the third spot in the middle stages of the race before nailing down the position. Baledge and Norton rounded out the top five.
Mel Kenyon Midget Series
Ryan Huggler used an inside passing coming off the fourth corner to pass his brother, Logan on the way to his first career win with the series.
Logan Huggler took the lead at the start chased by Alexandria’s Clayton Gaines, Trey Osborne, Cole Christy and Dameron Taylor.
But there were problems for Taylor at the start while looking for career win number 15. Taylor spun on lap four and when Gaines made contact with the turn four wall after tangling with Osborne, Taylor went to the pit area for a quick tire change.
Following the restart Ryan Huggler was running third behind his brother, Logan and Osborne when Osborne went high in turn two and dropped back to fifth.
Ryan made the pass for the lead on lap 16 and cruised to a comfortable win with Kameron Gladish claiming second. Behind the two front-runners there was a spirited battle for third between Osborne, Logan Huggler and fast qualifier Colin Grissom.
Grissom went from fifth to third on the final lap to record the podium finish getting inside of Osborne on the back straight and passing Logan Huggler coming off the fourth corner.
In other racing action: Chris Peters led the entire distance in Indy Champ Karts competition holding off Karl Schildback at the finish line with Rodd Pickett, Todd Pickett and Kylee Thompson rounding out the top five.
When leader Randy Owen was knocked from competition after tangling with a lapped car it gave Elliott McKinney the victory in Front Wheel Drive Figure-8 action with Nick Warner coming home in second.