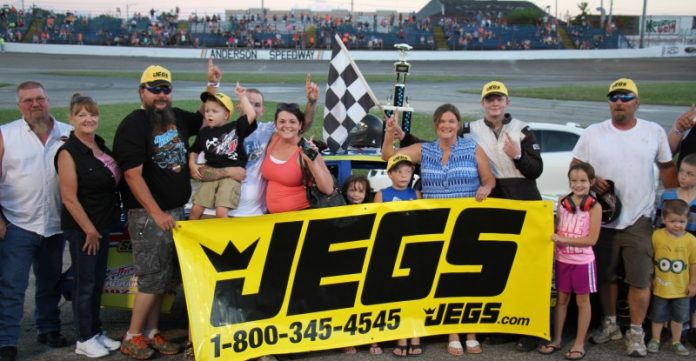 Noblesville driver Jeff Swinford accomplished something that hadn’t been done in over 20 years, win back-to-back National Crown races at Anderson Speedway.
Swinford turned in a dominating performance on Edgewater Woods Alzheimer’s Awareness night leading all 50 laps in the 67th running of the National Crown and lapping the entire field.
The last driver to win back to back National Crown events was Joe Beaver in 1994 and 1995.
Swinford set fast time during qualifications and started on the inside of the front row jumping into the lead over Shawn Cullen and Curtis Chapman.
By the halfway point two of Swinford’s biggest competitors for the National Crown title were out of competition with mechanical problems.
Cullen, the second quick qualifier, slowed on lap six pulling out of competition before returning at a reduced pace. His car lost high gear and couldn’t race at full speed.
On lap 19 Josh Tharp’s night ended with a rear end problem.
Swinford opened a comfortable lead over Chapman when on lap 44 Chapman’s car experienced a flat right rear tire.
Swinford went on to win by two laps over Nick Warner, Andy Sherley, Bruce McFall and Chapman.
Street Stocks
Indianapolis driver Jimmy Kirby III scored his first career Champion Racing Association Street Stock Division feature taking the lead from Andrew Teepe with seven laps remaining.
Teepe led the first 17 laps before turning over the point to Mason Keller for one lap. Teepe remained out front until Keller again went to the front on lap 23.
Kirby took the point for the first time on lap 39 with an inside pass of Keller, who slowed with a mechanical problem.
Teepe stayed glued on Kirby’s rear bumper looking several times to make an inside pass. He did get inside of Kirby on lap 66 entering turn three, but two laps late Kirby made the deciding pass in turn one.
Kirby went on to win by three-tenths of a second over Teepe, Knightstown’s Colby Lane finished third followed by Anderson driver Andrew Cook and Greenfield’s Phil Jenkins.
Thunder Cars
Markleville driver Randy Hoppes recorded his fifth consecutive win in the Thunder Car Division passing Jerry Swinford Jr.
Swinford started on the pole position following an inversion of the fastest five qualifiers with Hoppes starting fifth.
At the halfway point Swinford continued to lead chased by Mike Alley and Hoppes.
The only caution flag waved on lap 14 when Tyler Dehart rolled to a stop on the front straight. On the Ivy Tech restart Hoppes used the outside line to get around Swinford on the back straight.
From there Hoppes went on to win by 2.7-seconds over Swinford followed by Jeremy Threet, Alley and Shawn Evans.