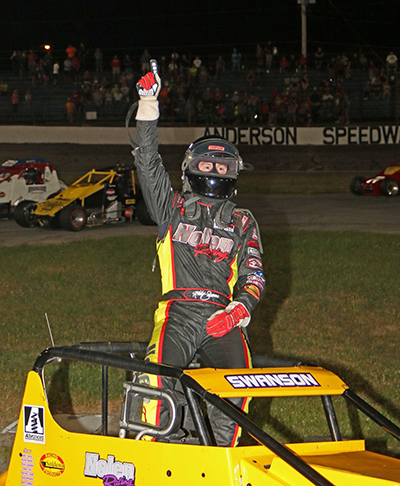 Kody Swanson took advantage of an opening in the low groove to win the sprint car feature on UAW Night at the Races Saturday Night. Swanson chased early race leader Aaron Pierce for more than 100 circuits and finally prevailed with the inside pass helped by lapped traffic.

RESULTS: UAW Night at the Races

Pierce started on the front row following the inversion from qualifying which saw Swanson, the fast qualifier starting sixth in the field. As expected Pierce grabbed the early lead chased by Joe Liguori and Chris Neuenschwander. Swanson, the winner of the Pay Less Little 500 in May, rapidly climbed through the field and by the tenth lap was running second. For the next 103 laps Swanson stayed glued to Pierce’s rear nerf bar but was never able to make a run on the inside to take the lead. With the race going green to checkers Pierce’s tires started to lose their grip with 25 laps remaining which allowed Swanson to turn up the pressure. On lap 113 the two leaders encountered the lapped car of Nick Hamilton coming off the fourth corner. Swanson was able to get inside of Hamilton while Pierce was forced to the outside. From that point Swanson pulled away to win by seven-tenths of a second over Pierce with Tyler Roahrig, Bobby Santos and Kyle O’Gara rounding out the top five.

Pierce said the tires on his ride went away at the end forcing him to run a higher line through the corners. Roahrig made a late race charge to be in a position to threaten for the win after starting fifth in the field. The sprint cars return to action on Sept. 12 with the running of the Glen Niebel Classic.

For the third time this year Tommy Kouns won the K&M Tool & Die feature event for the Mel Kenyon Midgets. Kouns went from the third spot to the lead on lap three by using the outside line to pass Ryan Huggler and race leader Ashton Tucker. Kouns pulled away from the rest of the field to record the victory with Huggler and Colin Grissom rounding out the top three.

Gregg Cory had to hold off Doug Dugger, Chad Cory and fast qualifier Jason Powers on a restart with three laps remaining win the Thunder Roadsters feature. It was Gregg Cory’s first feature win since 2017 and broke the three-race winning streak of his brother, Chad.Dugger finished second followed by Powers.