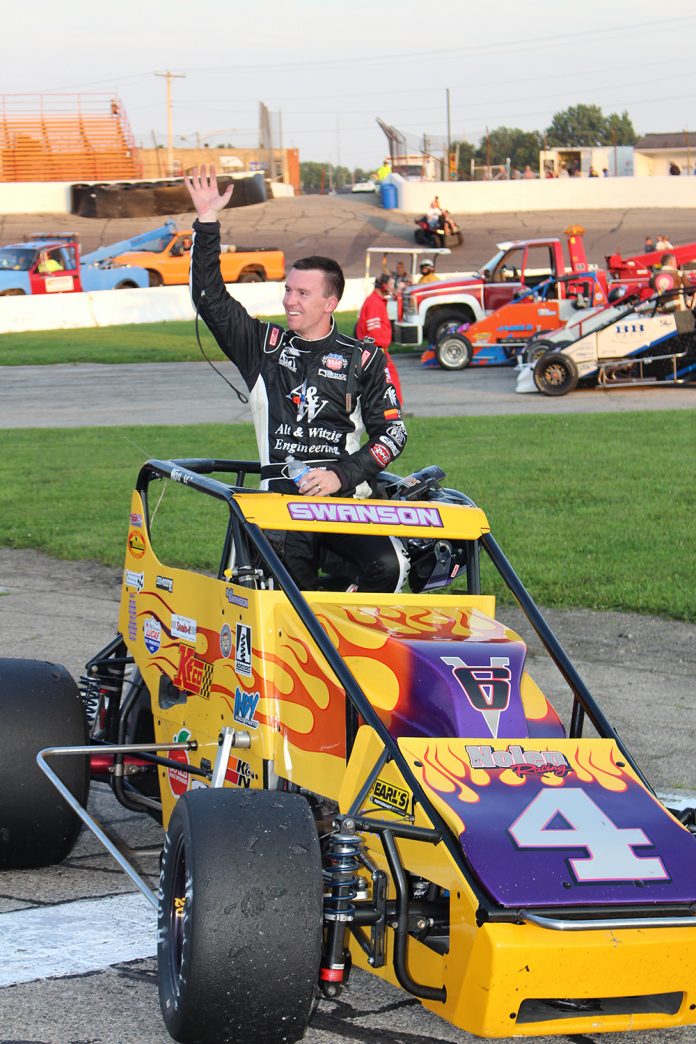 ANDERSON, IN – California driver Kody Swanson continued his string of impressive performances in a sprint car at Anderson Speedway winning the 125 lap feature.
Swanson took over the lead when pole sitter Chris Neuenschwander developed a mechanical problem on lap 33 and was never challenged for the win on the UAW sponsored event presented by Speedway Indoor Karting on Thursday.

With Swanson opening a comfortable lead the battle was for the second spot between Caleb Armstrong, Bobby Santos III and Kyle O’Gara.

Santos closed on the rear nerf bar of Armstrong with 25 laps remaining in a spirited battle for the runner-up position. Santos got around Armstrong on the back straight with 17 laps remaining when the two bumped.

That created a three-car fight for third with Armstrong able to hold off Kyle O’Gara and 2017 Little 500 winner Kyle Hamilton.

There were only five cars running on the lead lap at the finish.

The race was only slowed twice by caution periods for a spin by Scotty Hampton on lap six and a spin by Brian Tyler on the 31st circuit.

Twelve drivers posted qualifying times within a half-second of Neuenschwander’s time.
The next non-wing sprint Thursday night racing is set for 125 laps on Sept. 13.

Following a heated side by side wheel banging battle for the lead of the K&M Tool Mel Kenyon Midget Series Dameron Taylor emerged the winner.

The early lead was taken by Tommy Kouns chased by Cole Christy and Osborne. Osborne took the lead on lap three with Taylor cracking the top three on lap seven.

The fight for the lead was set up when Christy spun coming off the fourth corner on lap 8 and for 13 laps Taylor looked for a way to get around Osborne for the point.

Taylor made an inside pass on the front straight and led the final nine laps with Osborne coming home second followed by fast qualifier Kameron Gladish.

In the battle of two brothers for the victory in the Legends feature, older brother Ryan Miller bested his younger brother, Zach, by .022-seconds.

It was the closest finish in Legends Division racing action at Anderson Speedway.

Zach Miller took the lead at the start from his second row starting position chased by Caleb Heady and his brother, Ryan.

The two brothers raced side by side for the final 12 laps, swapping the lead several times before Ryan Miller made the decisive move with an inside pass on lap 19 on the front straight.

Zach Miller made a late charge on the final lap coming off the fourth corner but came up inches short. Heady came home in third followed by John Robbins and Sam Butler.