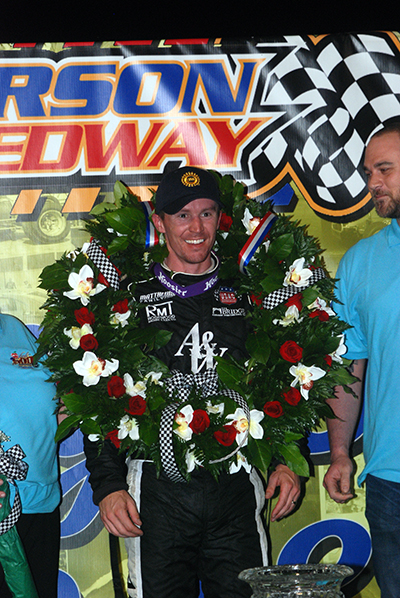 For the third time in four years California driver Kody Swanson pulled into victory lane in the 71st running of the Pay Less Little 500 presented by UAW at Anderson Speedway.

Swanson took the lead with an outside pass of his teammate Shane Hollingsworth on the back straight. The pass came after both drivers made their final pit stops on lap 354. That was followed by the long green flag run of 74 laps. The Gene Nolen Racing teammates led all but one lap with only Bobby Santos on the point when the Nolen teammates pitted together. It was a dominating performance with Swanson leading 344 of the 500 laps. Swanson led the first 186 laps from the pole position and his teammate took the lead when Swanson pitted.

Years ago legendary car builder Glen Niebel dominated the Little 500 with V6 power under the hood and the Nolen cars were both running with V6 engines. Santos came home in second followed by Jacob Wilson, Hollingsworth and Chris Windom.

Following the first round of pit stops Swanson moved into second by passing Bobby Santos on lap 296 and closed on Hollingsworth. Hollingsworth was able to hold off Swanson until lap 326 when the pass for the lead was made on the back straight with a lapped car coming into play.

The race was one of attrition with only 18 of the 33 starters running at the halfway point. Several incidents took out expected contenders through contact with other cars and the retaining walls. Tyler Roahrig, Kyle Hamilton, Aaron Pierce, Shane Cottle and Caleb Armstrong were all eliminated through incidents before 200 laps were completed.