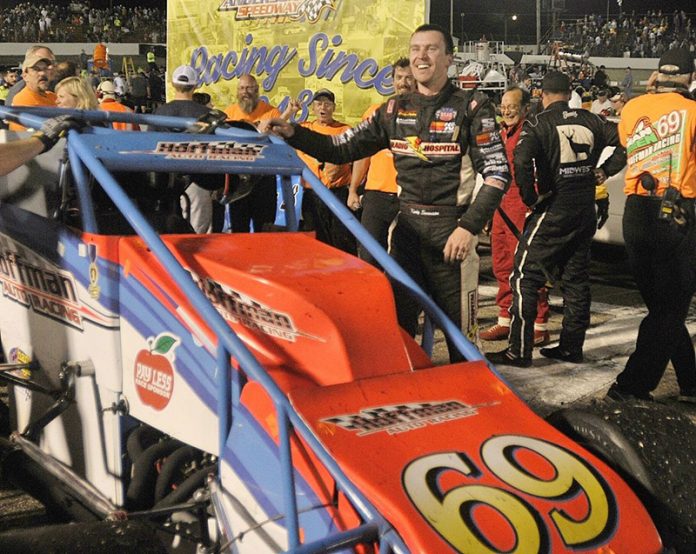 Kody Swanson inherited the lead when misfortune struck the leader and led the final 26 laps to win the 68th running of the Pay Less Little 500 at Anderson Speedway.

Swanson, the first driver to win the classic from California, had to hold off Dave Steele over the final 19 circuits for the win on Saturday.

Swanson started 14th in the 33-car field and ran amongst the leaders all night. Steele and Jerry Coons Jr. rounded out the top three. Swanson was driving for Hoffman Auto Racing.

Swanson gave the grandstand a fist pump after pulling into victory lane.

He was driving aggressively over the final 50 laps of the race.

“When you’re that close to winning the Little 500, you have to take the opportunities as they come,” he said.

It appeared Caleb Armstrong, who started from the pole position, used the right strategy when he took over the lead when Bobby Santos pitted on Lap 451.

But on Lap 472 Armstrong made contact with a slower car on the front straight and came to a stop in Turn 2.

That turned over the lead to Swanson chased by Steele and Coons, the only cars on the lead lap of the 19 still running.

Santos and second-place running Billy Wease caught a break on Lap 206 during a red flag by pitting and not losing any laps.

But by failing to pit on Lap 380, Santos lost any advantage he had as several drivers passed him with 75 laps remaining to get back on the lead lap. The team lost the chess match that is the strategy surrounding the Little 500.

Needing a caution for fresh rubber, Santos got into the back of Doug Dietsch on Lap 442. Santos lost two laps in the process.

Wease’s night ended on Lap 243 when he made contact with Ryan Litt in Turn 2.

With Santos leading Swanson, Steele, Coons and Armstrong, there were seven cars on the lead lap after 300 laps.

The first half of the race saw four of the six former winners that started knocked out of competition.

The attrition started on Lap 64 when Brian Tyler was involved in an incident in Turn 2 with Dietsch.

Two former champions, including defending champion Chris Windom, were knocked from competition in separate incidents. Jeff Bloom made contact with the outside retaining wall on the front straight, and seconds later Windom came to a stop against the Turn 1 wall.

Jacob Wilson was involved in a three-car incident on the back straight on Lap 197 when Travis Welpott spun and the cars of Wilson and Donnie Adams Jr. hit the inside retaining wall.