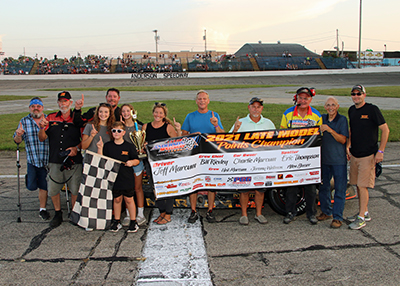 Fort Wayne’s Billy Hutson, a two-time winner at Anderson Speedway this year, set fast time during qualifications with Marcum on the outside of the front row. Hutson took the lead at the start with Marcum running in his tire tracks followed by Cassten Everidge, Jeff Whaley II and Buddy Davis. The running order remained unchanged until Hutson slowed on lap 21 with a mechanical problem giving the point to Marcum. Muncie’s Buddy Davis passed Whaley with an outside move on a lap 26 restart coming off the second corner. Marcum won by 2.2-seconds over Everidge, Davis, Whaley and Kevin Gross Sr.

In the closest point battle entering the night Jason Powers held a 2-point a margin over Doug Dugger in Thunder Roadster action. Powers extended that lead by taking fast time honors for the fourth consecutive time chased by Dugger. As could be expected Powers took the lead over Dugger with Brad Kendall running third. Kendall spun on lap 18 which ended his night and on the restart Dugger took the lead with an outside pass of Powers on the front straight. But a lap later Powers was back in front with a pass on the front straight. From there the two leaders ran in a tight pack with Powers winning by .4-seconds over Dugger with John Robbins coming home in third. Powers finished with three consecutive feature wins in the division to close out the season.