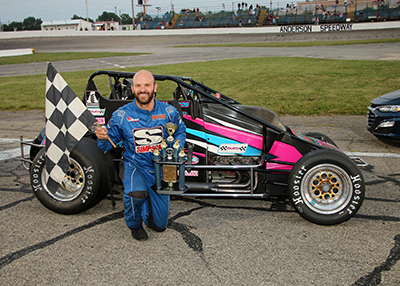 Bobby Santos III drove almost the perfect race to capture the Summer Sprint Showdown presented by CB Fabricating and The Tin Plate Fine Food and Spirits on Saturday night. Santos led the final 100 laps but had to hold off Tyler Roahrig at the finish. Roahrig set fast time during qualifying but with an invert of 10 for the 125-lap feature he along with Dakoda Armstrong and Jacob McElfresh would have to work their way to the front.

Travis Welpott led the first 25 laps chased by Brian Vaughn and Emerson Axsom. The first of only two caution flags waved on lap 22 for a spin by Mark Hall. By then Santos was running second and Roahrig was in ninth. On the restart Santos made an inside move of Welpott entering turn three and started to pull away from the field. Behind Santos there was tight racing amongst the top ten drivers as they were all looking for any advantage when dealing with lapped traffic.

But it was Roahrig that was able to use the inside groove in the corners to gain position. Roahrig passed Caleb Armstrong, Scotty Hampton and Kyle O’Gara over the course of nine laps and after 50 circuits was running fifth. By lap 75 Roahrig had moved up to second, but was still a long way from catching Santos when the final caution flag waved on lap 82 when Hampton slowed to a stop. Santos was able to maintain the lead on the restart going on to win by 1.2-seconds over Roahrig with Dakoda Armstrong, Axsom and Kyle O’Gara rounding out the top five.

Anderson’s Colin Grissom led the final two laps to capture the fifth annual Don and Mel Kenyon Classic. Grissom and leader Dameron Taylor bumped wheels in turn four propelling Grissom to the lead with Taylor losing two more positions. Fast qualifier Kameron Gladish took the lead at the start chased by Jack Macenko and Grissom. Following a caution on lap 17 Taylor was able to pass Gladish with an outside move on the back straight with Grissom also making the pass before the circuit was completed. Taylor opened up a comfortable lead initially but it was Grissom turning the faster laps, closing to the leader’s rear bumper with 25 laps remaining.

The race was red-flagged on lap 65 when Ayton Houk and Sam Hinds tangled in turn two, collecting the car of Clayton Gaines who barrel rolled down the back straight. On the restart Grissom first tried to make the outside pass for the lead but with the laps winding down looked to make an inside pass. Finally on lap 73 Grissom got underneath Taylor in turn three and the two bumped wheels sending Taylor up the banking. Grissom became the fifth different winner in the Don and Mel Kenyon Classic for the Day Transportation Mel Kenyon Midge Series by .255-seconds over Macenko, Houk, Taylor and Logan Huggler.

Jason Powers won his first Thunder Roadster feature of the year by passing Doug Dugger on the third lap with an outside pass on the back straight. Five competitors were eliminated on a lap one incident in turn one. Visiting driver Jake Tretow would finish .2-seconds behind at the finish with Dugger coming home in third.