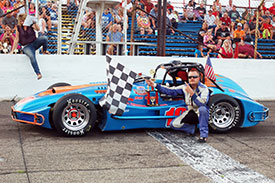 It was a good night for Frankton’s John Robbins last Saturday at Anderson Speedway by capturing his second Thunder Roadster win of the season.Robbins set fast time during qualifications turning a lap in 13.42-seconds to edge out David Lobbia for the honors.Brad Kendle took the early lead from the pole position followed by Doug Dugger and Mark Dietzen with Robbins running outside the top five.Lobbia moved into the third spot on the second circuit with an inside pass of Dietzen entering turn three. On the next lap Dietzen pushed high in the second corner which allowed Robbins and Marty Griffin to move into the top five.Kendle spun to the infield down the back straight after Dugger made the pass coming off the second corner. Robbins moved into the second spot driving past the spinning Kendle and inside of Lobbia.On the eighth lap Robbins took the point by getting inside of Dugger entering the third turner.Dugger was able to stay within shouting distance of Robbins, but came up four-tenths of a second short. Griffin finished third with Lobbia and Dietzen rounding out the top five.