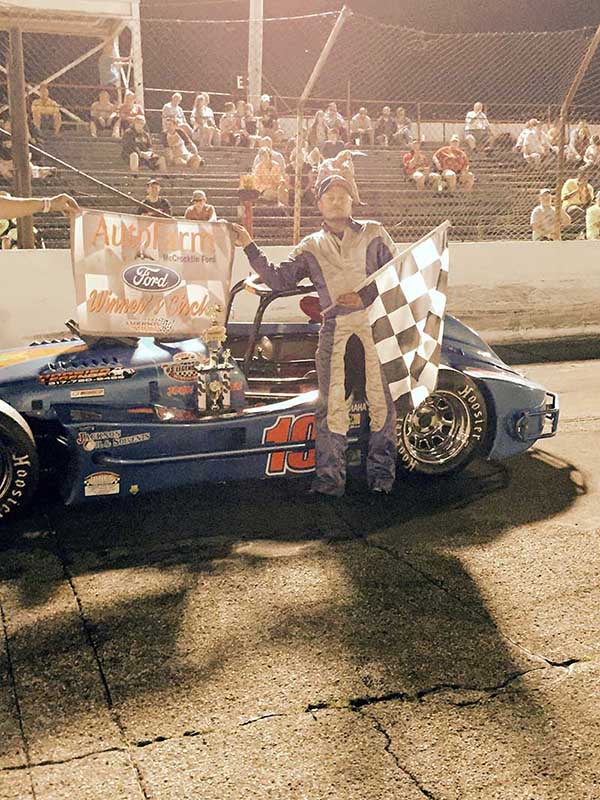 Robbins pulled into the AutoFarm McCrocklin Ford Winner’s Circle for the fourth time in five races.
After running third on the opening lap behind Rodney Oliver and Brad Kendle, Robbins quickly dispatched Oliver on the second circuit with an inside pass entering turn three.
He then closed the gap on Kendle and grabbed the top spot on lap eight with a similar move in turn four.
Kendle spun on the back straight on the 14th circuit while battling with Dave Osborn but was able to continue without the caution flag waving.
At the finish Robbins won by 2.5-seconds over Osborn with Marty Griffin, Mark Dietzen and Oliver rounding out the top five.|
“Dave (Osborn) jumped into the car for the first time tonight and set quick time,” Robbins commented after the win. “I knew I would have my work cut out for me tonight.
“It just keeps getting more fun,” he said of his third consecutive victory.
Osborn set fast time while subbing for Doug Dugger at a time of 13.293-seconds around the quarter-mile oval. Robbins clocked in second at 13.4180 seconds with Griffin was third quick at 13.624-seconds.
Kendle led all ten laps to record the heat win followed by Osborn, Robbins, Dietzen and Griffin.