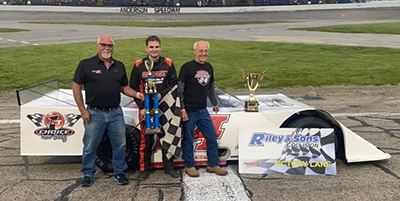 Once Tyler Roahrig took the lead with 55 laps remaining in the CB Fabricating 100 at Anderson Speedway he was not seriously challenged. It was the first visit of the Reveal the Hammer Outlaw Super Late Model Tour at Anderson Speedway. The race had two distinct complexions with Shawn Amor pulling away to an early lead Saturday thanks to an inversion of 10 after qualifying. Amor was chased by Chris Benson and Brandon Ross, but all eyes were on the back of the pack where the father and son combination of JR and Tyler Roahrig were working their way through the field.

After 20 laps fast qualifier JR Roahrig was running third and Tyler had moved up to the fourth position. By lap 25 JR and Tyler Roahrig were running second and third, but they trailed Amor by 5 second, but they were cutting three-tenths of a second off the gap on each circuit. With Amor’s progress slowed by traffic, by lap 40 the Roahrig’s had closed to his rear bumper. Tyler Roahrig got underneath his father for second place on lap 43 and three laps later went to the point with an inside pass of Amor in turn three. The next lap would change the complexion of the race when Rick Hahn Jr. got loose in turn one and collected the cars of Amor and JR Roahrig, all three were finished for the night. From there Tyler Roahrig maintained a comfortable lead winning by 6.5 seconds over Steve Needles with Ross rounding out the top three.

In other racing action: Jimmy Kirby captured the ThunderCar feature win for the fourth time to remain perfect on the season. Defending champion Ron Phipps and Earl Adams rounded out the top three.

Jeffersonville driver Shane Isgrigg led all 50 laps to record two feature wins in the Hart’s Auto Center Crown Vic Division. He finished ahead of Matthew Adams and James Mikesell in the make-up race of May 8 and topped Mikesell and Adams in the second feature.