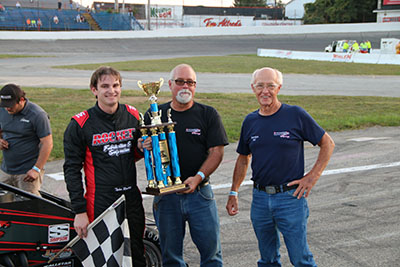 Tyler Roahrig inherited the lead for the conclusion of the Glen Niebel Classic and powered to an impressive win at Anderson Speedway. The 20th running of the Glen Niebel Classic presented by CB Fabricating and Thompson Insurance was completed on Thursday after inclement weather on Sept. 12 stopped the action. It was Roahrig’s second sprint car win on the high banked quarter-mile oval having won the Tony Elliott Classic last year. Nick Hamilton finished second 7.76-seconds back followed by Kody Swanson, Aaron Pierce and Caleb Armstrong.

The starting line-up for the resumption of the race was altered dramatically with early leader Bobby Santos III, Eric Gordon and Kyle O’Gara not able to return because of prior commitments. That placed Roahrig in the lead on lap 62 followed by Nick Hamilton, Pierce, Swanson and Kyle Hamilton. Kyle Hamilton’s night ended on lap 85 with an apparent handling problem.But no one was able to mount a challenge to Roahrig with Nick Hamilton, Pierce and Swanson battling for the second spot.Swanson got inside of Pierce for the third spot on lap 116 with an inside pass coming off the fourth corner. Santos had taken the lead from Pierce on the second lap and was leading on lap 61 when the remainder of the event was postponed because of inclement weather.

Pendleton’s Colin Grissom remained the hottest driver with the K&M Tool & Die Kenyon Midgets winning for the fourth time in six races. Grissom led all 40 laps of the feature after a full field inversion following qualifications and was pressured early in the race by Anderson’s Ashton Tucker. Tucker settled for second with Logan Huggler coming home in third.

Clayton Gaines scored his first ever Thunder Roadsters victory at Anderson Speedway getting around Jason Powers on a restart. Gaines was then able to hold Powers off by running the low groove around Anderson Speedway. Ron Wright came home in third.