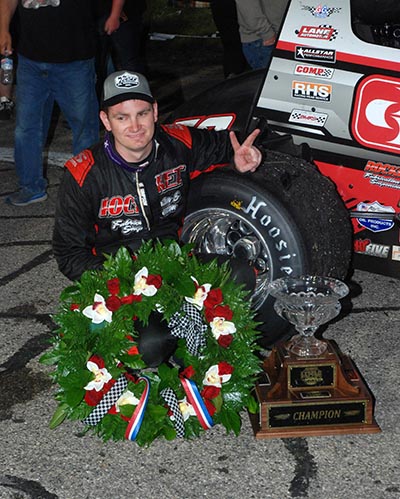 Tyler Roahrig made it back to back wins in a race that saw many of the contenders fall by the wayside during the 74th Annual Lucas Oil Little 500 presented by UAW at Anderson Speedway. Roahrig started from the pole after setting new one and four-lap track records during qualifying and led a race high 219 laps.

The Plymouth driver took the lead from Dakoda Armstrong on lap 375 and continued to pace the field to the finish on Saturday before a near capacity crowd. But he had to survive a tangle just past the halfway point that could have ended his night. The red flag waved on lap 260 when Shane Hollingworth made contact with leader Tanner Swanson. Behind that incident Bobby Santos III checked up and made contact with Tyler Roahrig with the end result being Santos flipping over the back of Hollingsworth barrel rolling several times before coming to a stop in turn one. “The wreck was in front of us,” Roahrig said after the victory. “I was trying to get a good run on the bottom and couldn’t slow down and climbed over Bobby (Santos).”

Roahrig also made contact with Billy Wease on lap 271.“I thought our race was over multiple times,” he said. “I thought we were running out of gas and the left shock was all bent up and probably so is the right one. I can’t believe how good the car drove after that.”Roahrig turned the fastest laps in the 11.4-second range just past the 400-lap mark as he pulled away from Armstrong.

Ryan Newman brought out the 12th caution flag on lap 495 up against the turn two wall, which wiped out a comfortable lead for Roahrig and set up a five-lap shoot-out to the finish. Roahrig beat Armstrong to the checkered flag by 1.129-seconds, the only cars on the lead lap, were C.J. Leary, Kyle O’Gara and Caleb Armstrong. “The first win was way easier,” Roahrig said.

Dakoda Armstrong said he didn’t have anything for Roahrig on the final laps. Leary lost a lap early in the race when he pitted before the pits were open.

Dalton Armstrong garnered rookie of the year honors by finishing ninth after starting 28th and captured the Fred Jones Hard Charger Award in the process.

Brian Gerster led the first 107 laps before being passed by Roahrig on lap 110. Roahrig surrendered the lead to Tanner Swanson during the first round of pit stops. Tanner Swanson filling in for Aaron Pierce took the lead on lap 205 when the leaders pitted and prior to that brushed the turn four wall on lap 134. Swanson started showing engine smoke on lap 298 and was black-flagged on lap 305, surrending the lead to Dakoda Armstrong.

Three-time winner Kody Swanson spun on the front straight on lap 198 while running second to Roahrig and lost several laps.