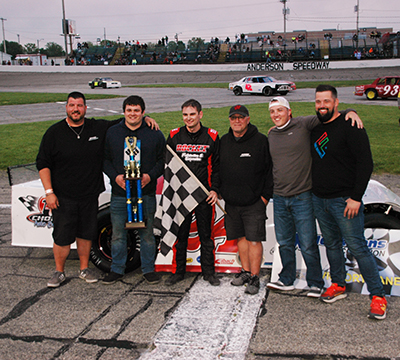 Tyler Roahrig (Plymouth, Ind.), the reigning and two time champion of the Lucas Oil Little 500 Presented by UAW, returns to Anderson Speedway for this weekend’s CB Fabricating presents Reveal the Hammer Outlaw Late Models presented by The Herald Bulletin. Roahrig will look to continue a recent hot streak that has produced three wins, three pole positions, and four podiums in the span of three weeks.

On Thursday, May 26th Roahrig made history as the fastest man in Little 500 history. With a one-lap qualifying record of 10.799 and a four-lap qualifying record of 43.477, Roahrig solidified the pole position for the 74th Annual Lucas Oil Little 500 Presented by UAW by shattering both of the previous track records. As the defending Little 500 Champion, Roahrig
proved all week long that it was his race to lose. He had one of the fastest cars in the field, finishing top five in all practice sessions he participated in, and stirred up conversation around the paddock that a new track record was indeed in play.

After claiming the track record and securing the pole position, Roahrig’s focus was on winning his second consecutive Little 500. After surviving a mid race incident that caused Bobby Santos III’s car to flip down the front stretch, Roahrig went on to lead 230 of the 500 laps and crossed the finish line in first place once again. Now a two-time winner of the most prestigious pavement race in Sprint Car racing, Roahrig had to shift his focus to another main event. The first leg of the Grand Slam Outlaw Late Model Series.

Returning to his home track of Plymouth Motor Speedway, Roahrig would be switching from his non winged Sprint Car to his Outlaw Late Model. With only one week to temporarily forget his impressive win in the Little 500 and move on to a completely different discipline of racing, Roahrig did not skip a beat. It was a homecoming to remember as he worked his way through the field to his second win in as many races. Later that week, Roahrig got into a Super Late Model for the Money in the Bank 150 at Berlin Raceway in Marne, Michigan. Roahrig’s car was fast right off of the trailer as he claimed the pole position for the event. Competing in the top-five for much of the event, he finished with a strong ninth place as his car began to fall off towards the end.

Roahrig returned to Plymouth two days later in the same sprint car that he piloted to his Little 500 victory. In the first points earning race for the 500 Sprint Car Tour, Roahrig rallied to a second place finish behind a dominant Kody Swanson. The next night, as the Tour went to Berlin Raceway, Roahrig’s recent experience there helped him set the fastest time in qualifying. The invert at the start of the race caused Roahrig to start in sixth, but the truly dominating car jumped out to the lead within a few laps and paced the field to a surprisingly quick 40 lap race that lasted only 11 minutes.

This Saturday, June 18th Roahrig will return to Anderson Speedway. This time it will not be in a non-winged sprint car but in his outlaw late model that won him victory just weeks ago at Plymouth Motor Speedway. The Reveal the Hammer Outlaw Late Models will compete in a 100 lap feature and will be joined by the Noble Wine & Spirits ThunderCars, USSA Kenyon Midgets, Marcum’s Welding Front Wheel Drives, and Thunder Roadsters. Tickets for the event will be $15 for adults, $5 for kids 6-12, and Free for kids 5 and under. Spectator gates will open at 4pm along with rotating practice. Qualifications are set to begin at 6pm with racing starting at 7:30pm. Fans who are unable to attend this weekend’s race can view all the action on Racing America TV.