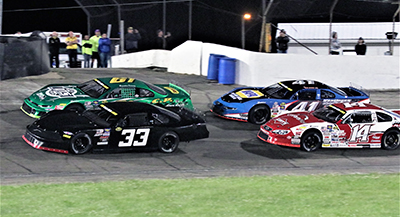 Several area drivers will be seeking their first win when the CRA JEGS All-Stars Tour comes to Anderson Speedway. The pro late model series has competed on the high banked quarter-mile oval eight times since 2011 in racing that has produced six different winners. The JEGS All-Stars Tour will be competing in the Sport Clips 100 presented by U.S. Army and there are 19 drivers entered.

Zachary Tinkle, a former McGunegill Engine Performance Late Model champion at Anderson Speedway, is in his second year of competition with the All-Stars Tour. He will be joined by J.P. Crabtree of Muncie and Albany’s Mike Sargent. Former winners of the event that are entered in the field include 2016 winner Cody Coughlin and 2014 winner Steve Dorer. Trent Synder is the only driver to winner multiple times at Anderson Speedway driving into victory lane in each of the first three years.

The Day Transportation Kenyon Midgets are on the racing card where Ayrton Houk has started the year perfectly with two victories, including the Dick Jordan Classic at Anderson.