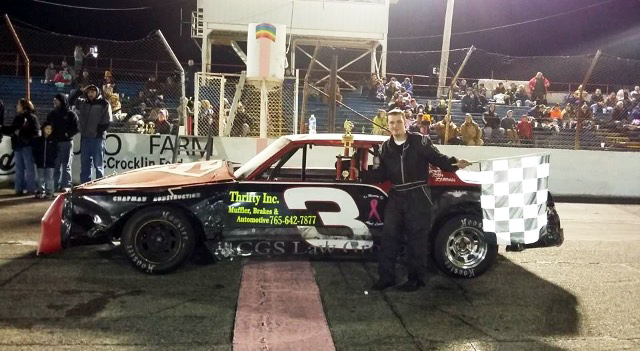 In a dominating performance Josh Poore led 95 of the 100 laps to capture the Thunder Car feature on the Stoops Freightliner Night of Thrills Saturday at Anderson Speedway.

Poore showed he had the car to beat by setting a new track record for the Thunder Car Division during qualifications turning a lap at 14.201-seconds which bettered the mark of 14.479-seconds set in 2014 by Curtis Chapman.

He led the first 25 laps chased by Trent Gossar the entire distance. Gossar took the lead on lap 26 when Poore got trapped behind a slower car entering turn three.

Poore returned to the lead following a restart on lap 37 with an outside pass of Gossar.

The 2015 Street Stock champion at Anderson Speedway was never able to shake a determined Gossar, who was lurking only a few cars lengths back of the leader.

A strong run by Jeff Swinford came to an end on lap 61 when it appeared he lost an engine in turn two while running fourth. The incident collected the fifth plac running car of Larry Southerland.

Swinford started 16 in the field and worked his way through the field, cracking the top five on lap 40.

Tharp worked his way up through the field and was running second on lap eight when he spun entering turn two.

But that didn’t prevent him from the victory.

On the restart Nick Warner took the point from early race leader Trent Gossar, but Gossar returned to the lead a lap later with an inside move on the back straight.

Tharp used the same move to slip around Warner and on lap 16 he got inside of Gossar coming off the second corner and drove away to a comfortable win.

Nick Warner led all ten laps to win the “Corkscrew” race for the front-wheel drive cars chased the entire way by Jerry Dane and Kelly Jones.

Warner also scored the victory in a crazy “Trailer Race” which featured 14 competitors and plenty of action in the figure-8 crossover.