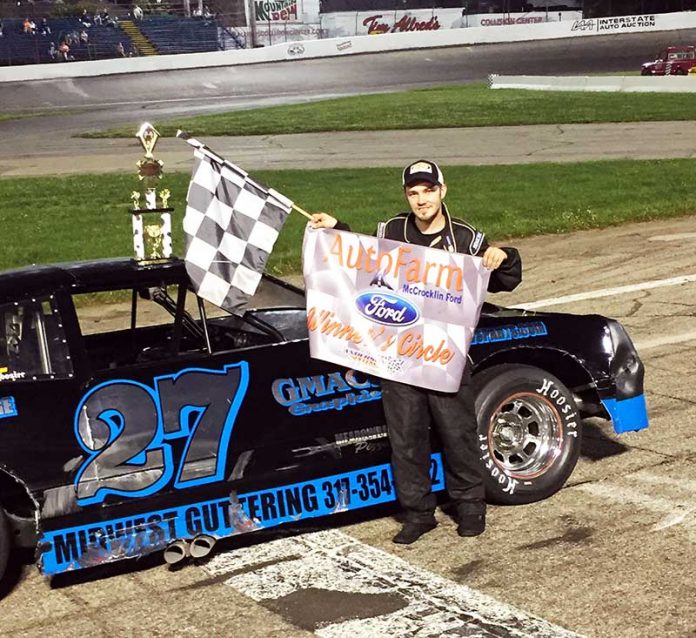 Poore started sixth in the field and showed patience in the early stages of the race moving into the third spot on lap four and then followed Willie DeHart around around leader Missy Bagienski.

After looking inside of DeHart for several laps, Poore was able to back the deciding pass of the race on the tenth circuit coming off the second corner.

For the first time in his racing career Dave Osborn won consecutive features in the Thunder Roadster division, but the win was a result of a most unusual happening.

John Robbins took the white flag and then suddenly pulled off toward the infield grass. The steering wheel on his Thunder Roadster disconnected giving the win to Osborn.

With Harmon comfortably out front point leader Matt Tharp and Trent Gossar battled for the second spot the entire distance.

Gossar was finally able to get a run inside of Tharp on lap 22 entering turn one to claim the position. Ryan Claborn and Terry Neal rounded out the top five.

Zachary Taylor, 13, passed veteran Jamie Domski with an outside move on lap 18 entering turn one and then dove to the inside coming off of turn two to capture the CSR Mini Cup feature.

For Taylor it was his first win in four visits to Anderson Speedway.

Domski grabbed the lead on lap 12 with an inside pass of early leader Trevor Adams on the back straight.