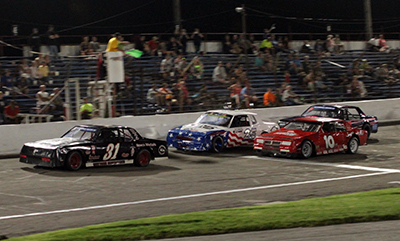 The National Crown is the longest continuous stock car race in the nation and this Saturday it returns to the roots that started it all in 1949. The Edgewater Woods/Sugar Fork Crossing National Crown will feature the PGG Enterprise ThunderCars for the first time in the 70-year history of the race. The ThunderCar drivers have already competed in two 50-lap features this year, but the National Crown will be paying $1,000 to the winner.

There have been three different winners in ThunderCar action this year with Dale Harper and Dustin Sapp already winning a 50-lap feature. Sapp is the only driver to win two features in 2019 and Robbie Wyman is the most recent winner.

The Marcum’s Welding Front Wheel Drive division returns to action where there have been two first time winners in recent weeks. Ricky Craig has scored two victories this year with Michael McKinnon and Cory Plunkett the most recent victors.

The Hart’s Auto Figure 8 division and the CSR Super Cups will also be in action this Saturday.