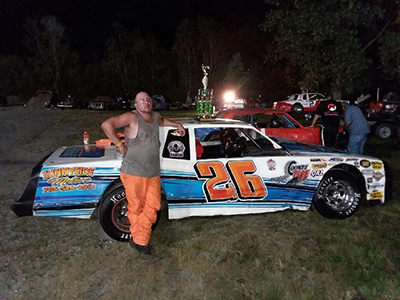 Just when it looked like Frankie Oakes’ strong performance in the ThunderCar 100 would not produce a victory, his fortunes took a 180 degree turn. With ten laps remaining in the PGG Enterprise ThunderCar race at Anderson Speedway Saturday, race leader Josh Garr had smoke erupt from his ride.

Garr had not run outside the top five since the start of 100 lap event presented by AERCO Heating and Cooling and Sherwin Williams, and took the point from Oakes on a lap 68 restart with an outside move entering turn one. From there Garr slowly stretched the lead over Oakes, Jameson Owens and defending race winner David McConnell. But on lap 90 Garr’s car erupted in smoke and he slide to a stop in turn one. That returned Oakes to the point and he went on to win by 2.8-seconds over Owens, McConnell, Jerry Swinford Jr. and Nick Warner. Fast qualifier Robbie Wyman took the lead at the start with Oakes taking the lead on a restart on lap six following a spin by Jeremy Threet, with an assist from Andy Pine. Wyman would run second to Oakes until lap 58 when he retired with an apparent overheating problem.

VanValkenburg scores Front Wheel Drive win. Visiting Indianapolis driver Donald VanValkenburg and Elliott McKinney waged a spirited side by side battle for the final ten laps of the Marcum’s Welding Front Wheel Drive feature. The outcome wasn’t known until the final run to the checkered flag with VanValkenburg winning by .294-seconds over McKinney. Running the low groove VanValkenburg was able to stay just in front of McKinney at the start/finish line to maintain the lead. Slower traffic put McKinney behind VanValkenburg for the final lap, but the Anderson driver made one more charge entering the final corner, coming up short at the finish. McKinney took the lead at the start and surrendered it to VanValkenburg on lap six. The two drivers made contact on the back straight with VanValkenburg bouncing off the retaining wall, but still taking the lead. Point leader Ricky Craig finished third followed by Will Jennings and Shane Reed.