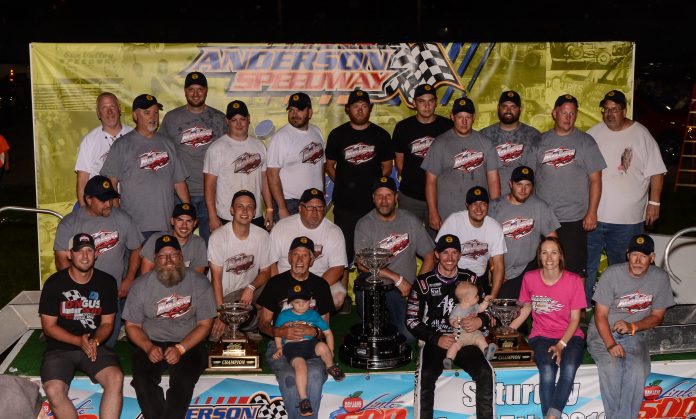 Anderson, Indiana (February 13, 2020): Gene Nolen will return to the 72nd Annual Pay Less Little 500 presented by UAW with a focus of winning his third consecutive Little 500. The Greenfield, Indiana based team tried for over 20 years to win the Little 500. Now that they have won two races in a row, the Nolen race team returns to the storied race with a bullseye on their back. In addition, the two team cars of Kody Swanson and Shane Hollingsworth led all but one lap during this year’s 500-lap race.

Even after some mid-season health concerns, Gene Nolen will continue the same racing operation as in 2019. The organization will campaign with two non-wing pavement sprint cars and one USAC Silver Crown car. He has tabbed the three-time Little 500 winner and five-time USAC Silver Crown champion Kody Swanson to drive for him again 2020. This comes off of another successful year that saw Swanson win his third Little 500, and second in a row. He also was able to claim the USAC Silver Crown drivers’ championship. In addition to the entire Silver Crown schedule, the team plans on racing the four non-wing races at Anderson Speedway.

“We can’t wait for the Little 500 in May,” said Gene Nolen. “It took us so long to finally win (a Little 500), we want to win three races in a row! Both of my drivers are very capable of winning this year.”

The reigning winner of the Pay Less Little 500 presented by UAW will be looking for a repeat in 2020. This will be the fourth year Kody Swanson has driven for Nolen Racing in the Little 500. Swanson’s results in the Little 500 are some that could rival the best of all time. In his first five Little 500 races, he hasn’t finished worse than 7th. In those five races he has led 670 laps and completed all but 6 laps. In addition to that, he has picked up wins for two first time winning car owners. Back in 2016 he was able to win for Hoffman Auto Racing and two years ago for Gene Nolen Racing. Along with winning the Little 500, Swanson was able to win the 125 Lap UAW Night at the Races in 2019.

“I try not to think about the other competitors too much,” said Kody Swanson. “I know they’re continuing to improve, so I try to focus on how we can improve ourselves. We will continue to work as a team to put forth our best effort.”

“The hardest part about the race (Little 500) is the duration,” Swanson added. “You have to have mental stamina throughout the 500 laps. You see scenarios happen in the race that you don’t see in any other race.”

Shane Hollingsworth will be back for his 12th consecutive Pay Less Little 500 presented by UAW. Hollingsworth has made all of his starts with Gene Nolen as his car owner. Last year, Hollingsworth was able to finish in the fourth position after leading 155 laps. The start of his Little 500 week was an eventful to say the least. After fighting gremlins in his number 20, he jumped in the team’s back up car during pole qualifying for the Little 500. Hollingsworth has finished 3rd on two occasions in 2011 and 2018.

This year, Nolen Racing will once again be sporting the V6 engine. It was the first time the engine has been in victory lane since Bentley Warren won with Glen Niebel in 1997. The V6 was debuted by Glen Niebel in the 1984 Little 500. Nolen racing is one of a few teams that competes with the V6. Nolen Racing engines are built and maintained by Bill Tranter/Tranter Engines.