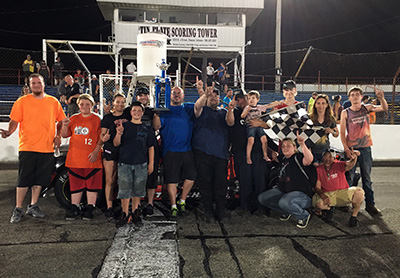 For the second time in a week the same car won big races at Anderson Speedway but with a different driver at the controls. Last Monday Carson Hocevar drove the Johnny VanDoorn super late model to victory in the Redbud 400. VanDoorn won the 2019 race. On Saturday Josh Myers drove the Dustin Sapp owned ThunderCar to the win in the 71st running of the National Crown presented by Byrider. Sapp won the race in 2019 in the same car.

Myers led all 50 laps but it was no Sunday drive as he was hounded throughout the race by Ronnie Rose and Robbie Wyman. Starting on the pole positon after setting a new track record for the division during qualifying, Myers and Rose ran side by side for several laps before Myers took the lead. The opening laps would set the stage for every restart until the checkered flag waved.

The first caution flag waved on lap 29 when Caleb Southerland made contact with the outside retaining wall in turn three. During the caution period, Rose who was running second at the time went to the pit area. Wyman attempted to make the outside pass of Myers on the restart but was not able to take the lead. Rose who restarted eighth captured the second spot on lap 32 with an inside pass of Wyman in turn three. The final caution flag waved on lap 44 when Travis Lee lost an engine. Rose could stay with Myers for a couple of laps but finished .483-seconds back followed by Wyman, McConnell and Dale Harper.

Myers who never ran Figure 8 in the National Crown said it was an important race for him to win. Rose explained his pit stop was for loose spark plug wires and on the final restart the same problem hampered his effort.

In other racing: Michael McKinnon won the Marcum’s Welding Front Wheel Drive feature taking the lead on lap eight from Ronnie Constant. It was McKinnon’s second feature win of the year and he was followed to the checkered flag by Constant and Chuck Cook. Shane Isgrigg won the Hart’s Auto Crown Vic feature over Josh Foults and Jason Atkinson. Isgrigg took over the lead on lap 16 when leader Shelbie Crabtree spun in turn two after contact with Atkinson. Cole Rhoten made it back-to-back wins in Midwest Champ Karts action with teammate Tyler Payne coming home second followed by Jeremy Howell