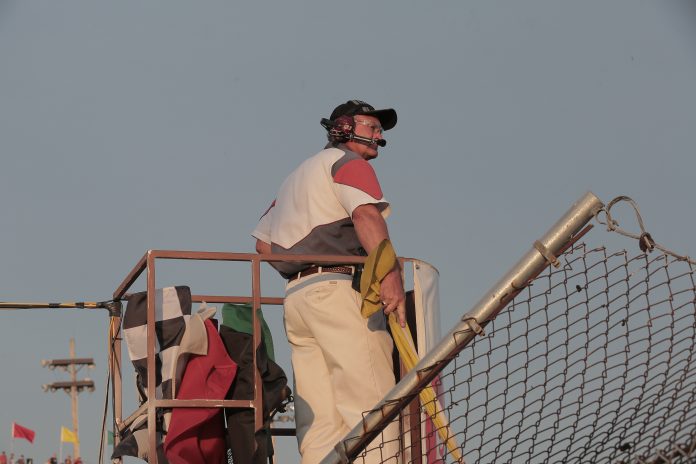 May 24, 2021 – Gary Mong is a familiar face to many visitors of Anderson Speedway for the Pay Less Little 500 presented by UAW annually. The 62-year-old Chesterfield resident is one of the first faces eager to greet Little 500 fans as they arrive each year. The warm and personable Mong always carries a smile and is quick to offer a handshake. He knows no strangers and often can be found at the campground hanging out with Little 500 fans.

But on race day it’s a completely different scenario. Mong has his game face on and holds one of the most important roles of the Little 500, he’s the flagman. This year will mark Mong’s twelfth straight Little 500 he has flagged.

Mong’s involvement in the Little 500 goes back to the late 1960’s where he spent many nights in the stands as a spectator. After helping at Anderson Speedway in a variety of capacities including flagman, he finally got his chance to flag his first Little 500 in 2010.

Much like the drivers and crew members, Mong has his own agenda and rituals as it relates to flagging the race each year. ”I try to attend the Little 500 Hall of Fame banquet each year if I get the opportunity the afternoon of the race” explains Mong. “I then get the stand ready and trophies ready. Usually after we do our hot laps, while they’re staging cars, I try to find a quiet place to get myself mentally prepared for the race”.

Mong admits the race is unlike any he will flag throughout the year. It has its own challenges. “The race is more of a mental challenge than it is a physical challenge for me. The race pretty well mentally wipes me out after 500 laps. Between race director Kenny Wright and I, there’s so much we gotta keep our eyes on”.

The day after race often shows signs of wear on the body as well for Mong. ”My body doesn’t hurt. The first year I did it Kenny Wright told me I’d be sick from everything I would be breathing in. All the stuff would eventually come out of your system. All the guys make fun of me, but I take a little bit of oxygen after the race. The race doesn’t make me sick anymore. I don’t feel bad physically after the race. Its more mental”.

When the green flag drops, Mong may be the only guy on the grounds unable to leave his post for a restroom break of drink of water. “I try to hydrate before the race and take my final restroom break right before the start. I do have a bottle of water with me, but keep it at a minimum, so I won’t need a pit stop” laughs Mong.

Being the flagman of the most chaotic and hectic race on the planet isn’t always easy. Mistakes can and have happened. “It happened last year” chuckled Mong.”My pocket got caught on the light switch and flipped it up. Once it does you gotta go caution. But I’ve never dropped a flag. But that stuff is gonna happen”.

Besides being blasted by rubber from the cars for 500 laps, and the toxins being breathed in, the race has other dangers Mong faces. “II was flagging my first Little 500 and the side of the flag stand used to be open. I saw this big rock coming at me. I thought this is gonna hurt. That thing hit me right in the groin area. I doubled over and had tears coming out of my eyes. I had to endure what had happened for about 10 laps”.