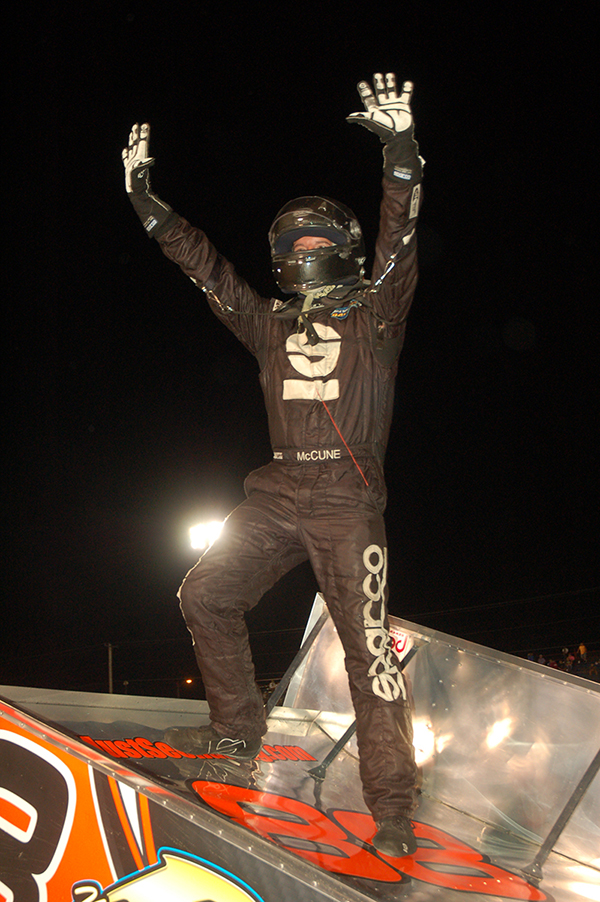 Jimmy “Bulldog” McCune led all 50 laps to record the hat trick twice in 2015 action for the Must See Xtreme Racing Winged Sprint action at Anderson Speedway on Saturday.
McCune, the series point leader, set fast time during qualifications and won the first of two qualifying races during the Labor Day Extravaganza presented by Hoosier Park Racing & Casino and then went on to win the feature.
The Ohio driver also completed a clean sweep of the three Must See Racing events at Anderson Speedway for the year.
“Just to get one here, let alone all three of them; it’s a testament to my guys and how hard they work,” McCune said in the AutoFarm McCrocklin Ford Winner’s Circle. “But you have to have a lot of luck here also. That’s one thing about Anderson, you gotta have a ton of luck.
“I’ve had some good years, but this is a storybook one,” he said of his 10 feature wins in 2015. “I love this track and we know how to set up a car to go fast.”
McCune was chased the entire distance by Grant Galloway who was always in striking distance of the leader, especially during the first half of the 50-lap feature as the two wove their way through lapped traffic.
McCune was almost caught up in the first caution when Sam Davis spun entering turn three and collected the fifth place car of Brian Vaughn. McCune was coming up to lap the fifth and sixth place running cars at the time.
“That made me a little nervous,” he said. “I wasn’t sure if he (Davis) was going to go high or low on the track.”
Galloway had two more chances to pass McCune on Interstate Auto Auction restarts, but was never able to make a charge for the lead.
Ike Beasley came home in third followed by Anthony McCune and John Turnbull. Anthony McCune and Turnbull came from the fourth run to finish in the top five.
Jimmy McCune took the lead on the 22nd lap of the first qualifying race with an inside pass of early leader Vaughn.
McCune started eighth in the field and worked his way up to second after 15 laps. Chris Neusenschwander, Anthony McCune and Jeff Bloom rounded out the top five.
Galloway passed Don Hamilton on the eighth circuit of the second qualifying race with an inside pass on the front straight. Beasley was able to slip inside of Hamilton to claim the second spot with John Turnbull and Brad Wyatt rounding out the top five.