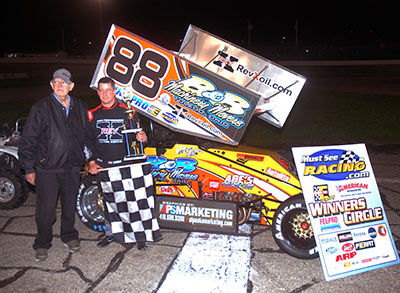 For the second year in a row the Ohio based McCune team claimed the top two honors during the Must See Racing Winged Sprints visit to Anderson Speedway.

The invert put Ryan Litt and Trey Osborne on the front row. Before a lap could be completed Litt’s night ended as the result of a mechanical failure. That moved Tom Jewell to the front row and he immediately jumped into the lead chased by Joe Liguori, and Geoff Kaiser. When the caution flag waved on lap five for a spin by Tom Geren, McCune was already running fifth. A two-car incident two laps later brought out the red flag when Joshua Sexton and Christian Koehler. On the restart McCune moved inside of Tyler Roahrig to move into fourth and four circuits later was able to drive underneath Kaiser in turn two. When McCune and Liguori encountered traffic, Liguori went low and yielded the position. McCune took the lead from Jewell on lap 19 with an inside move along the front straight on a restart. From there McCune drove away from the field finishing 3.5-seconds ahead of his nephew, Anthony, who took over the second spot on lap 47.

In the inaugural running of the Dick Jordan Classic for the K&M Tool & Die Mel Kenyon Midget Series, Kameron Gladish made it back to back wins at Anderson Speedway.

Logan Huggler, looking for his first career win at Anderson, took the point at the start chased by fast qualifier Tommy Kouns and Ryan Huggler. Kouns brought out the second caution of the race on lap four after brushing the back straight wall.Gladish passed Ryan Huggler for the second spot on lap six and stayed glued to the rear bumper of Logan Huggler’s car for the next 13 laps. After looking both high and low to make the pass, Gladish was able to get inside Huggler entering turn three to take the lead. Gladish was followed to the checkers by Logan Huggler and Colin Grissom.

Jeff Marcum won the opening season race for the McGunegill Engine Performance Late Models as he seeks a third consecutive championship. Marcum was able to pass Kent Baledge on lap 19 with an inside move entering turn one. Ronnie Rose grabbed the point at the start before yielding to Baledge on lap 11 with an outside move entering turn one on a restart. Coming home third was rookie of the year contender Zachary Tinkle.

Sam Butler claimed his first ever win at the speedway in Legends competition taking the lead from John Robbins on the third circuit. For most of the race Butler was pursued by teammate Zach Miller, but held on to win by a half-second. The third member of the team Caleb Heady finished third.