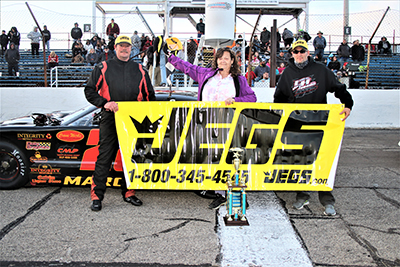 It was a good night for three drivers with close ties to Anderson Speedway on opening night for their touring series’. There were a total of 99 cars in the pit area for O’Reilly Auto Parts Night. Jeff Marcum is no stranger to Riley & Sons Collision Victory Lane and led 74 of the 75 laps in the Champion Racing Association’s Late Model Sportsman feature event. Paige Rogers led the opening lap of the O’Reilly Auto Parts 75 with Marcum taking the point with a traditional inside pass entering turn three. Marcum had to hold off challengers Ronnie Rose,  Tommy Cook and James Kirby through eight restarts. With Marcum out front fans were treated to intense racing for the second spot with Rose, Cook, Kirby  and fast qualifier Billy Hutson swapping spots on every restart. Kirby finished second followed by Rose, Cook and Hutson.

New Castle’s Jason Atkinson led 64 of the 75 laps in the CRA Street Stock feature taking the lead on lap 11 from early leader Matt Barnes. Once Atkinson took the lead there was only one caution period the rest of the way with the final 49 laps run under the green. Barnes finished second followed by Allan Williams Jr., fast qualifier Andrew Teepe and Nathan Greene.

Tom Gossar Jr. took the lead from Terry Eaton Jr. with an inside pass entering turn one on lap 16 and drove to the victory. Eaton and Bo Hoelscher crashed on the front straight while battling for the second. Hoelscher’s night was finished and Eaton started on the tail of the field. That put Trent Gossar into the second spot and he was unable to overtake his brother. Kyle Frame, Chris Jennings and Jason Clevenger rounded out the top five.

Ayton Houk had a perfect night in the Mel Kenyon Midget Series setting fast time, winning his heat race and dominating the Dick Jordan Classic. Houk pulled away from the field to win by 4.8-seconds over Dameron Taylor and defending series champion Colin Grissom.