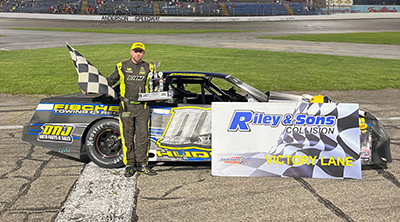 Brett Hudson led a Kentucky sweep of the podium in the Tom Wood Honda 150 at Anderson Speedway. Hudson took the lead from Chuck Barnes Jr with just seven laps remaining on Saturday to not only capture the race win but was crowned the Four Crown champion for the Champion Racing Association Street Stocks.

Alan Williams Jr. led the first 62 laps before being passed by Barnes following a restart on the front straight. Hudson moved into the second spot on lap 65 and challenged Barnes for the point until the halfway break. The final 75-laps ran caution free with Hudson glued to the rear bumper of Barnes car and Williams running in a distant third. After working the high groove for several laps, Hudson was able to get underneath Barnes on lap 143 on the front straight. Hudson went on to win by .4-seconds over Barnes with Williams, Andrew Teepe and Jimmy Kirby rounding out the top five. Hudson won the Four Crown title over Williams by one point.

In the Cintas 100 for the CRA Sportsman Late Models, Muncie’s J.P. Crabtree battled for several laps with early leader Jeff Marcum before finally making the pass on lap 67 coming off the fourth corner. Marcum led from lap 28 and had the dominant car pulling away from the field through six caution periods and a red flag. Right after getting passed for the lead, Marcum pitted during a caution period to change a flat tire and returned at the back of the field. Marcum climbed up to the sixth spot by lap 81 when he tangled with Billy Hutson on the front straight ending his night. Tanner Jack and Hunter Jack finished second and third in the race, but both cars failed post-race inspection and they were disqualified. That gave Keegan Sobilo the runner-up position followed by Charlie Keevan. Keegan led the first three circuits from the pole position, giving way for one lap to Cassten Everidge. He would maintain the point until being passed by Marcum on lap 28 entering turn one. The race was slowed by a total of ten caution periods with the red flag being displayed on lap 58 for a four car incident on the front straight.

Two members of the same family won the two features for the Vintage Wrench Ford Division. Kyle Evans won the first feature and his nephew, Austin Evans, claimed the win in the second event. Phil Jenkins set fast time and won the “Roval” race for the Thunder Roadsters, his first victory at Anderson Speedway since 2004.