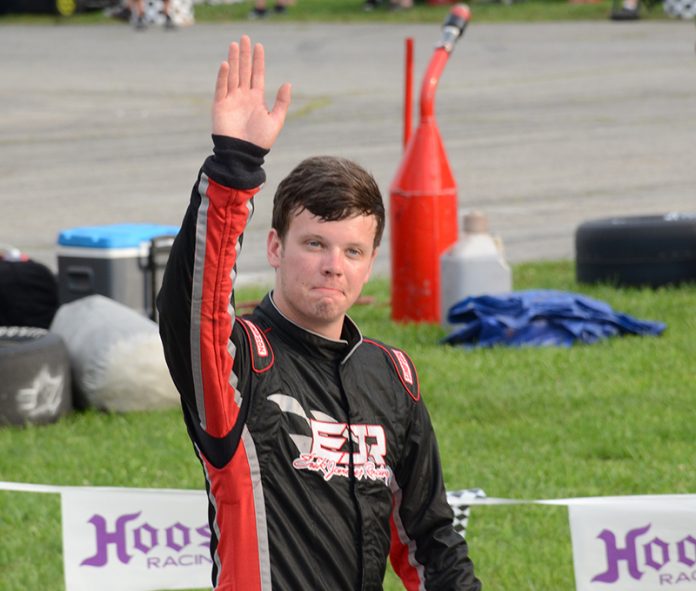 NASCAR young gun Erik Jones took the second step toward a $100,000 bonus by capturing the Stoops Freightliner Redbud 300 at Anderson Speedway on Saturday.

Jones, 19, last month won the first of the JEGS Triple Crown events at Berlin Raceway and by winning the Redbud 300, he is in a position to earn the bonus with a win at the Winchester 400 in October. The Byron, Mich., driver has won the last two Winchester races.

Jones started ninth in the 24-car field, taking the lead for the first time on Lap 167 with an outside move on Jack Smith following a restar, and he never relinquishing the point.

Smith’s run was even more impressive by the fact that he didn’t take any tires at the halfway point and restarted on the pole position after running 11th after the first 150 laps.

The top four cars raced nose to tail the final 85 laps as each of the front runners waited for someone to make a mistake. Pollard moved into the No. 5 position on lap 246 with a pass of rookie Grant Quinlan and started to run down the leaders.

At the finish Jones won by 1.3-seconds over Smith. The race was slowed eight times for 53 laps by caution flags and the red flag waved on Lap 167. There were four lead changes among five drivers.

“This is pretty awesome,” Jones said in the AutoFarm McCrocklin Ford Winner’s Circle. “We came here to get a shot at the $100,000. “It’s good to win here at Anderson and win the Redbud 300.”

Smith said the team decided to take no tires to gain track position. “I was hoping to stay in front long enough for the tires to equal out,” he said. “I was trying to keep from getting tire spin off the corners.”

Brandon Oakley, who led 97 laps in the first half of the race, had his night end against the Turn 1 wall on Lap 167 when he tangled with Rick Turner on the front straight on a restart. The two drivers were battling for second.

Helped by the inversion of the top eight qualifiers, Turner led the first 26 laps before being passed by Brandon Oakley with an outside move entering turn one.

Oakley led until Lap 125 when Hemric took the lead.

Hunter Baize, who started 14th, used the outside groove to be running second at the halfway point.

Fast qualifier Ross Kenseth, the 2012 race winner, spun on the 12th lap and went two laps down to the leaders. After twice getting the “lucky dog” and getting back on the lead lap, Kenseth brought out the caution for a second time on Lap 80. He retired after completing 121 laps.