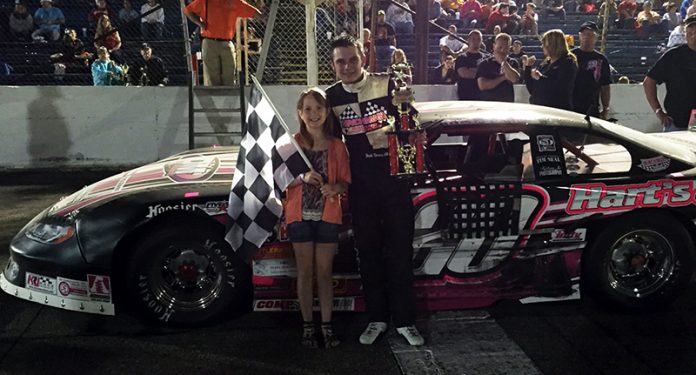 There wasn’t a full moon on Saturday night, but there was plenty of rubbing and racing during the McGunegill Engine Performance Late Model feature that saw Jack Dossey III emerge the victor.

For the second time this year Dossey set fast time during qualifying and started sixth in the 15-car field, never running outside of the top five.

On the final restart with three laps remaining Dossey was able to hold off Jeff Marcum, who had qualified second quick. Danny Trent passed Marcum with an inside move entering turn three to finish second with Marcum coming home third. Kent Baledge and Ronnie Rose rounded out the top five.

On an Interstate Auto Auction restart Rose got shuffled back from second to sixth with Danny Trent moving into the second spot on Madison County Storm Water Partnership night at Anderson Speedway.

Trent tapped the back of Baledge’s Chevrolet in turn bringing out the second caution flag after move drives spun and put defending champion Dossey into the lead.

Adam Lee had not won a race at Anderson Speedway but he has now won two in a row in compact car racing.

He started fourth in the field and passed early leader Larry Hughes Jr. with an inside move on lap five on the front straight.

The only caution flag waved on lap 17 when Joe Jennings lost an engine.

From there Eaton pressed Lee the entire remaining distance and came up .4-tenths of a second short.

In opening night for the new Harts Auto Center Figure-8 Jeff Swinford led from start to finish to record the victory.

Swinford was chased for the first 22 laps by fast qualifier Josh Tharp, who experienced transmission problems with three laps remaining.

He was followed to the checkers by Nick Warner and Bruce McFall.